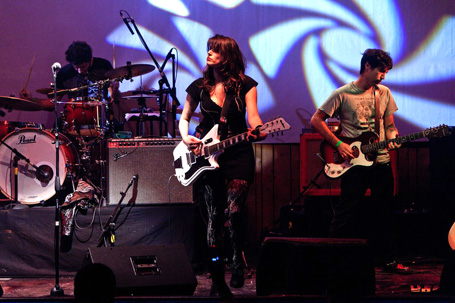 Intimate Stranger - doing the slog, but getting the results.

Nights At The Roundtable – Intimate Stranger – 2012

Intimate Stranger – doing the slog, but getting the results.

I realized I haven’t played anything new in a while, it’s been mostly material from the distant and deep-distant past. But there’s a lot going on in the real world, and a lot of it is pretty sensational. And one of the bands I’ve been following for a few years now is Intimate Stranger. I first heard about them on MySpace (back when MySpace was good), and was suitably knocked out by the fact this band came from Chile, Croatia, spent time between London and Santiago and have finally settled in Austin Texas. Talk about Music Without Borders.

They’ve been working steadily, building a fan-base for a few years now, just getting the word out. And it’s been paying off.

They have a new album (it came out a few months ago, I’ve been late . . .my bad), White Streets, Dark Fields has been getting attention and tonight I’m featuring one of those tracks. White Streets.

Check them out and check them out live if they happen to be gigging around your neighborhood. They’re worth it.