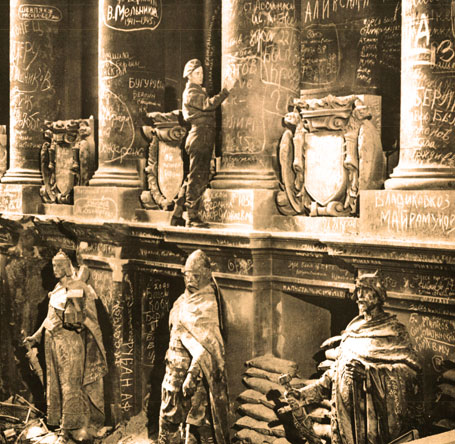 While the war in the Pacific continued, news of the Allies marking an official entry into Berlin provided a reminder that all would be over soon. News on this July 3rd in 1945 was highlighted by an extended report of American, British, French and Russian troops marching into the former seat of Nazi power and assuming the zones of Occupation. Some confusion, badly damaged roads and an all-but-ghost city greeted the Occupation armies. But a collective sigh of relief that this phase of the War was finally over.

Not so much on the Pacific side, as news of continuous B-29 raids over Tokyo continued to destroy Japan’s effort to wage war. Still, fighting was continuing, and accounts of horrific atrocities by retreating Japanese troops provided further grim evidence the War was not going to be over soon enough.

All this, and news from Capitol Hill of Cabinet shakeups and labor strikes for this July 3rd, 1945, as reported by the NBC News Of The World, Night edition.