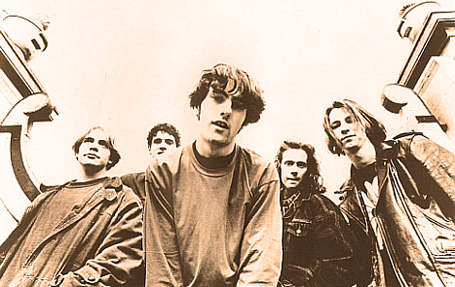 Thousand Yard Stare - from "Most Promising Future" to "lost in the shuffle".

Nights At The Roundtable – Thousand Yard Stare – 1992 (Live At Glastonbury).

Thousand Yard Stare – from “Most Promising Future” to “lost in the shuffle”.

In case you haven’t noticed, there is no Glastonbury Festival this year. Reports are, organizers are giving the grounds a rest. Other reports are the upcoming Olympics made the annual festival impossible to pull off. And still other reports had a drastic shortage of Porta-Potties, since the Olympics had most of them. My vote would be with the Porta-Potties.

But in any event, as a sort of homage to the Festival-that-isn’t this year, I thought I would run a few tracks from bands who were prominently featured at the 1992 Glastonbury Festival, some 20 years ago.

Tonight it’s a band who were celebrated in the British Press as having the most promising career. Thousand Yard Stare fell into a kind of nether-world category; not quite part of the Brit-Pop revival, not part of the Madchester Scene and not really identifying with the Shoegaze movement. They more or less blazed a trail of their own, even though one of their first producers was the now-legendary Stephen Street (who gave us The Smiths, Blue, The Real People and a host of others). They had good material, but the audience was slow to react. And they went from Most Promising to Highly Overlooked in the big picture of Rock in the 90’s.

This track, Seasonstream, was recorded at Glasto on June 27th, 1992 and was briefly issued as part of a 2-CD fundraiser set for Greenpeace. I’ll be running more tracks from Glasto ’92 over the next few days.

In the meantime, check Thousand Yard Stare out.