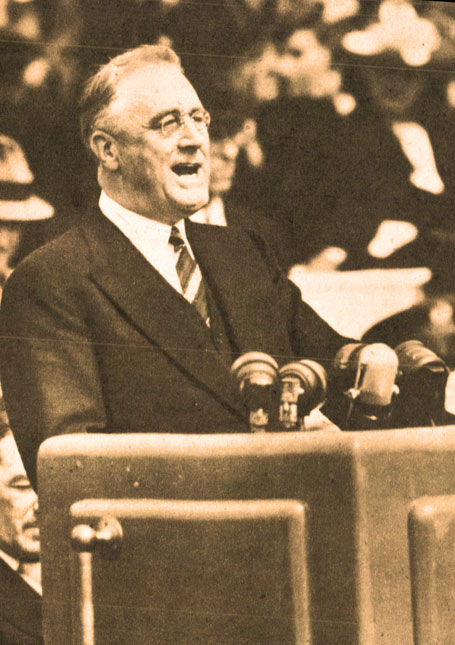 President Roosevelt - not one to mince words or shirk responsibilities.

President Roosevelt – not one to mince words or shirk responsibilities.

Billed as a Fireside Chat, even though it was one of the hottest Summer days in Washington, President Roosevelt gave one of his frequent talks on the state of the Nation and the State of the Government.

Assessing the accomplishments of the recently adjourned 75th Congress and his thoughts on the upcoming mid-term elections, FDR described what programs had been implemented and what bills had been passed.

“After many requests on my part the Congress passed a Fair Labor Standards Act, what we call the Wages and Hours Bill. That Act –applying to products in interstate commerce — ends child labor, sets a floor below wages and a ceiling over hours of labor.

Except perhaps for the Social Security Act, it is the most far-reaching, the most far-sighted program for the benefit of workers ever adopted here or in any other country. Without question it starts us toward a better standard of living and increases purchasing power to buy the products of farm and factory.

Do not let any calamity-howling executive with an income of $1,000.00 a day, who has been turning his employees over to the Government relief rolls in order to preserve his company’s undistributed reserves, tell you — using his stockholders’ money to pay the postage for his personal opinions — tell you that a wage of $11.00 a week is going to have a disastrous effect on all American industry. Fortunately for business as a whole, and therefore for the Nation, that type of executive is a rarity with whom most business executives most heartily disagree.”