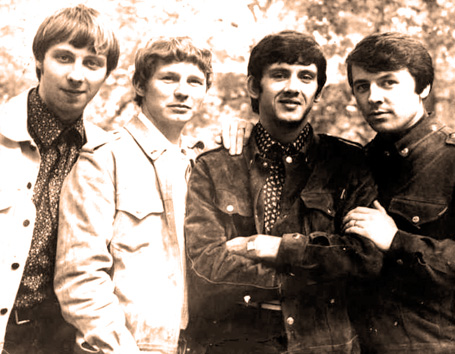 The Searchers In Session – 1967 – Nights At The Roundtable

Click on the link: The Searchers In Session – Swedish Radio – 1967

One of the groups spearheading the British Invasion of the early 1960’s was The Searchers. They were often mentioned in the same breath as The Beatles, and they were also located in that hotbed of talent, Liverpool. They succeeded in cranking out a substantial number of hits between 1963 and 1966. But then, times changed, tastes changed and the music changed. Sadly, The Searchers really didn’t. And even though they were still a well regarded fixture on the music scene, their days of riding on the reputation of those heady earlier days were becoming numbered.

But they were huge in Sweden. And during those years, all the way up to 1967, they frequently performed live over Sveriges Radio, the national radio network based in Stockholm.

Tonight it’s one of their last sessions from May 1967, which also coincided with the release of one of their last singles for Pye Records, a cover version of Western Union, a song that was to be an enormous hit for one-hit wonders The Five Americans. The Searchers didn’t do as well and the single has quickly become a screaming rarity in collectors circles.

So, with that in mind, here is the set breakdown for what you’re about to hear:

The Searchers – Sveriges Radio Sessions
May, 1967

1. Have You Ever Loved Somebody
2. Take Me For What I’m Worth
3. Western Union
4. When You Walk In The Room
5. Needles and Pins

If you aren’t familiar with them, suffice to say The Searchers were a very big deal in 1964. They may not be as easily remembered today, but they were one of the elements that changed things around, musically.

Hit the Play button and become familiar or be reminded – it’s your choice.