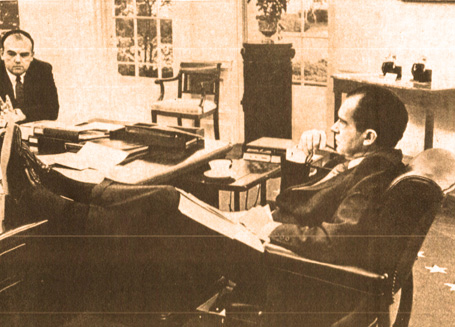 John Ehrlichman and Boss - Before the detritus hit the winnow.

John Ehrlichman and Boss – Before the detritus hit the winnow.

This day in 1974 came at the end of a week that saw the Watergate scandal come to a rolling boil. In the latest wave of setbacks for the Nixon White house, former Nixon aide John Ehrlichman was found guilty for his role in the Daniel Ellsberg break-in case. Ehrlichman’s lawyers said they would appeal. Another Nixon Aid, Charles Colson was heading to jail. The infamous “19-minute gap” in crucial Nixon tapes was given over to intense scrutiny and was heading to the Supreme Court for sorting out. And to top it all off, the long-awaited Watergate Report, clocking in at 3 volumes and 2200 pages, was released and pored over by a shell-shocked press corps.

And with all that came the news that former Supreme Court Chief Justice Earl Warren had died. His memorial and burial finished up the week.

All that and more, but hardly anyone noticed, via The Washington Week with Neil Strawser from CBS Radio on July 13, 1974.