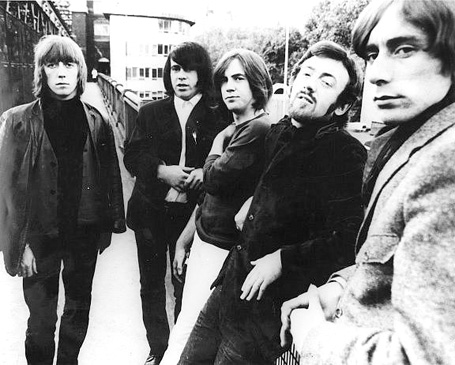 The Pretty Things - overlooked in the grand scheme of things.

The Pretty Things – overlooked in the grand scheme of things.

Over to one of the most underrated bands of the early 60’s, The Pretty Things were one of those bands who influenced a lot of others, and they were huge and notorious back in the UK. But in the U.S., they hardly made a dent.

The Pretty Things were preceded by Little Boy Blue and the Blue Boys, which consisted of Dick Taylor, fellow Sidcup Art College student Keith Richards, and Mick Jagger, among others. When Brian Jones was recruiting for his own band, all three joined Brian and Ian Stewart and were dubbed “Rollin’ Stones” by Jones in June 1962. Because there were too many guitar players in the band, Taylor switched to bass. He quit the Stones five months later, when he was accepted at the Central School of Art and Design in London. Phil May, another Sidcup student, convinced him to form a new band. Taylor was once again playing guitar, with May singing and playing harmonica. They recruited John Stax on bass, Brian Pendleton on rhythm guitar, and Pete Kitley on drums. Kitley was soon replaced by Viv Andrews, also known as Viv Broughton.

A fellow student at the Art College where May and Taylor studied, Bryan Morrison, was recruited as their manager. Morrison was to manage them for the rest of the 1960s, building his own Bryan Morrison Agency. This agency represented Pink Floyd among many other bands. Forming a partnership with songwriter Jimmy Duncan, he got the Pretty Things a recording contract with Fontana Records in early 1964. At this point, Viv Andrews was replaced by Viv Prince, a more experienced drummer who had played with Carter-Lewis and the Southerners.

The Pretty Things’ early material consisted of hard-edged blues-rock influenced by Bo Diddley and Jimmy Reed. Their first three singles appeared in the UK Singles Chart in 1964 and 1965: “Rosalyn” No. 41, “Don’t Bring Me Down” No. 10, and the self-penned “Honey I Need” at No. 13. They never had a hit in the United States, but had considerable success in their native Britain and in Australia, New Zealand, Germany and the Netherlands. Their appearance and behavior was provocative, with May claiming to have the longest hair in the UK and Prince often causing chaos wherever he went.

The band later blamed their lack of success in the US on the fact their management opted for a tour of the Southern Hemisphere in July–August 1965. During their two weeks in New Zealand, they caused so much outrage in the media that the New Zealand Parliament addressed the issue of granting entry permits to musicians like the Pretty Things. The band was never actually banned from re-entering New Zealand, contrary to what can be read in some sources.

The first of what would be many personnel changes over the years also began, with Prince, whose wild antics had become too much for the other members to endure, being the first to go in November 1965. He was replaced by Skip Alan. In early 1966 the band made a short film The Pretty Things on Film; it featured live footage and a music video prototype for “Can’t Stand the Pain”, which also featured their manager, Morrison. Rarely screened at the time, the film can be found as a bonus multimedia item on the Snapper CD re-issue of Get the Picture. 1966 saw the R&B scene fall into decline and the Pretty Things began moving away, flirting with soul music. In mid-1966 they made the UK Singles Chart for the final time with a cover of the Kinks song “A House in the Country”. In December 1966 came the single “Progress”, where the band were joined by a brass section.

Pendleton left in December 1966, and Stax followed in January 1967. Jon Povey and Wally Waller, both former Fenmen from Bern Elliott and the Fenmen, joined and made the band a five-piece once again

Tonight it’s a sampling of two periods of The Pretty Things, via Top Of The Pops. The first comes from the 1965 Hardcore Blues period and the last track comes from their brief excursion into Psychedelia from 1967.

Here’s what they play:

1. Midnight to Six Man
2. L.S.D. (meaning: Pounds, Schillings and Pence – not what you imagined it was about).
3. Defecting Grey.

A classic band who have maintained a pretty strong cult following over the years. Now you get to hear why, if you haven’t already.