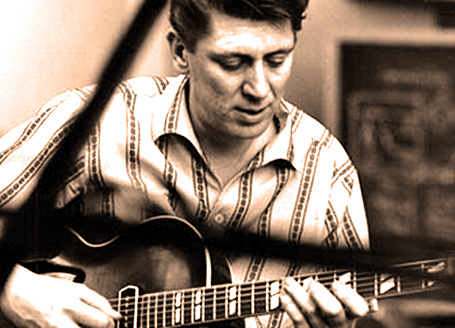 Tal Farlow - dubbed "The Octopus" by friends and fans alike.

Tal Farlow – dubbed “The Octopus” by friends and fans alike.

Live Jazz of the 50’s this week, via the All-Star Parade of Bands series from NBC Radio, broadcast on April 23, 1956. Featuring legendary Guitarist Tal Farlow and his Trio and Marian McPartland and her Trio, live at the Composers on 58th Street in New York.

From Blue Note by Scott Yanow:

Nearly as famous for his reluctance to play as for his outstanding abilities, guitarist Tal Farlow did not take up the instrument until he was already 21, but within a year was playing professionally and in 1948 was with Marjorie Hyams’ band. While with the Red Norvo Trio (which originally included Charles Mingus) from 1949-1953, Farlow became famous in the jazz world. His huge hands and ability to play rapid yet light lines made him one of the top guitarists of the era. After six months with Artie Shaw’s Gramercy Five in 1953, Farlow put together his own group, which for a time included pianist Eddie Costa. Late in 1958, Farlow settled on the East Coast, became a sign painter, and just played locally. He only made one record as a leader during 1960-1975, but emerged a bit more often during 1976-1984, recording for Concord fairly regularly before largely disappearing again. Profiled in the definitive documentary Talmage Farlow, the guitarist can be heard on his own records for Blue Note (1954), Verve, Prestige (1969), and Concord. He died of cancer July 25, 1998, at age 77.~ Scott Yanow

And from AllMusic – and another by Scott Yanow:

Marian McPartland became famous for hosting her Piano Jazz radio program beginning in 1978, but she was a well-respected pianist decades before. She played in a four-piano vaudeville act in England and performed on the European continent for the troops during World War II. In Belgium in 1944, she met cornetist Jimmy McPartland and they soon married. Marian moved with her husband to the United States in 1946, where she sometimes played with him even though her style was more modern than his Dixieland-oriented groups. McPartland eventually had her own trio at the Embers (1950) and the Hickory House (1952-1960), which until 1957 included drummer Joe Morello. She recorded regularly for Savoy and Capitol during the 1950s and also made sessions for Argo (1958), Time (1960 and 1963), Sesac, and Dot. Although eventually divorced from Jimmy, they remained close friends, sometimes played together, and even remarried just weeks before his death. She formed her own Halcyon label and recorded several fine albums between 1969-1977. McPartland also made three albums for Tony Bennett’s Improv label during 1976-1977 before signing with Concord, where she remained after 1978.

Live Jazz was very alive and extremely well in the 1950’s.