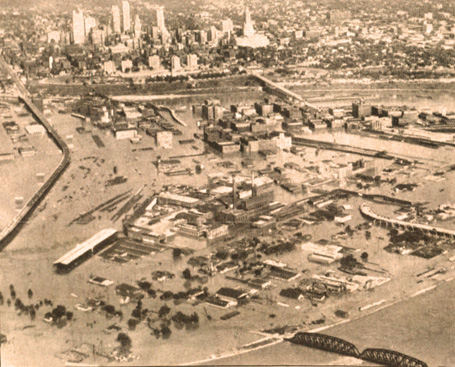 The main news on this July 17th in 1951 was about the devastating floods that swept over Kansas City, submerging some 2 million acres and causing an untold amount of damage and loss of life. On the day of this newscast, President Truman had finished a tour of the disaster area and had pledged some $25 million in recovery aid, which was quickly approved by Congress.

Other news regarding Congress and the goings-on in Capitol Hill had to do with the continuing fracas and debate over Price Controls. Dubbed “The Horsemeat Congress”, the question of Beef prices raised more than the average ruckus (and a song from one Congressman).

And finally, news from Los Angeles over a racial incident involving singer Josephine Baker and a diner at a local Hollywood eatery. Seems the diner, a White male from Dallas, made a few crude racial remarks about Ms. Baker, who in turn called the Police who said they couldn’t arrest him, but she could make a Citizens Arrest. The result was the diner was arrested by Ms. Baker and booked on being drunk and disorderly in public.

And so went this July day in 1951, as relayed by Don Hollenbeck, substituting for Edward R. Murrow and The News from CBS Radio.