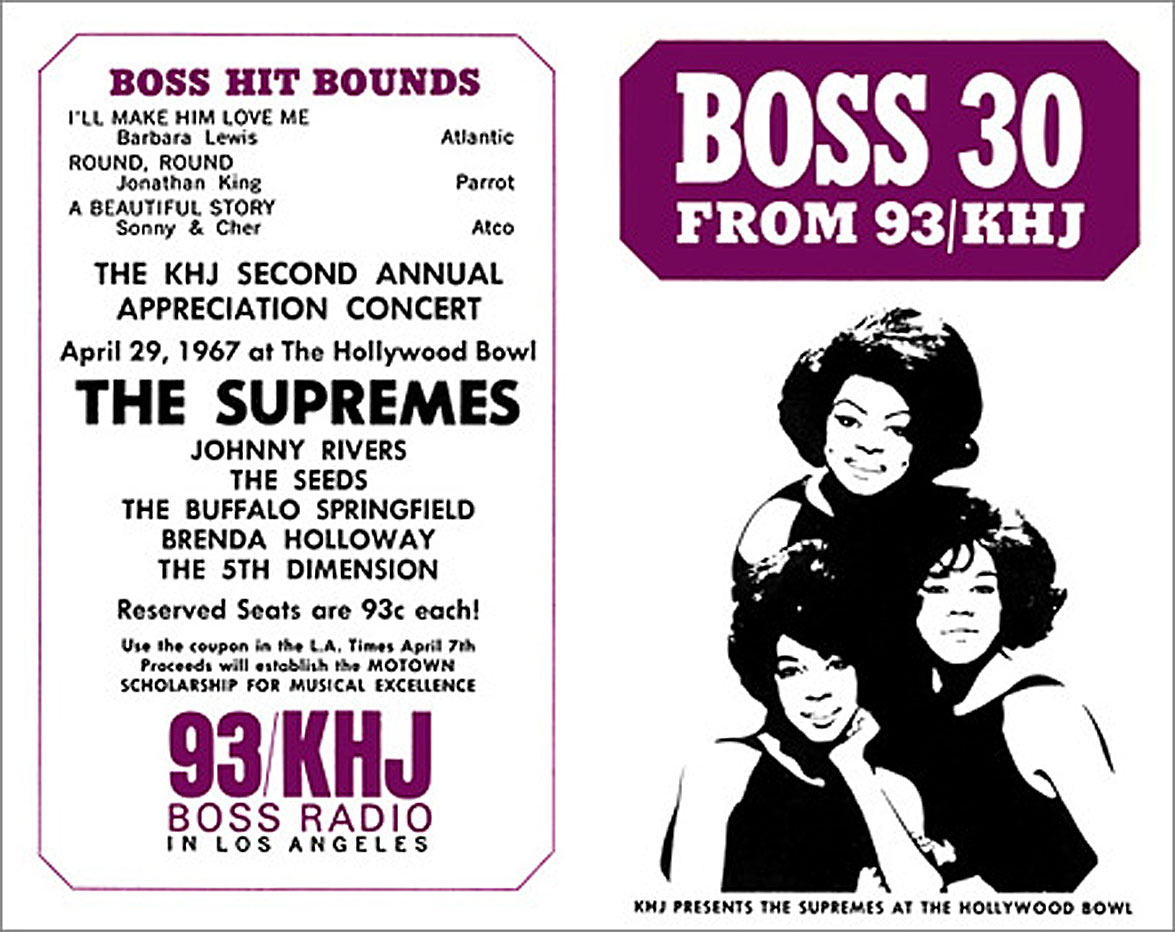 A flyer for the concert - Further evidence the 60's meant broad taste in music.

A flyer for the concert – Further evidence the 60’s meant broad taste in music.

Sometimes you wish today’s technology was around in the 60’s. If that were so, you would probably have already heard this concert, had it on record, reissued on CD, committed it to memory and you’d think nothing of it. But because the technology at the time was in its formative stages, a lot of caveats have to go in before hitting the above “play” buttons.

First off, this a rare and never heard-in-its-entirety concert. It features probably one of the broadest popular music representations you’re likely to hear in a live setting. This concert, in one night, and in one sitting featured The Buffalo Springfield, quickly followed by The Fifth Dimension, followed by Brenda Holloway, followed by The Seeds. After The Seeds (and on the second player) comes Johnny Rivers and ending the concert were headliners, The Supremes.

Almost 3 hours of non-stop music, all put together at a break-neck pace on April 29, 1967 as part of Rock Radio Powerhouse KHJ, who were celebrating their second year as a Top-40 station. As you can see by the flyer, tickets were sold for $.93 each. It is a historic concert and significant as it’s the first public hearing of what would become the next single by The Buffalo Springfield, the iconic Mr Soul. Along with the music comes guest appearances by all the KHJ Boss-Jocks, for those of you digging early L.A. Radio.

Now for the bad news. In early 1967, The Hollywood Bowl was going through some changes in their sound system, and a new piece of equipment was introduced, the Radio Mic. We don’t think anything about it today as its so commonly used, but in early 1967 it was still pretty bug-filled and you will hear a high pitched squeal that runs through the entire tape. I have tried to equalize as much of it out as possible, without sacrificing the sound. But the squeal runs through the full spectrum, and it can by annoying.

So I was faced with the question of whether to post this concert, because of its huge historic significance, or keep it nicely secured in its tape box, where it has sat since 1967, never to be heard during this or any other lifetime.

I opted for the sake of history, since too many important documents are hidden away, lost, destroyed and otherwise ignored until it’s too late. Once the music gets going (and that’s another point of caution – they still hadn’t gotten around to mixing very much so the instruments are in the back and the vocals are way too much in the front), you don’t really notice all the ugly bits. So with the caveats come apologies that the sound just couldn’t be better. I tried – but it is what it is.

Here’s who you’ll be hearing:

A memorable night and a historic night in music. Buckle up.