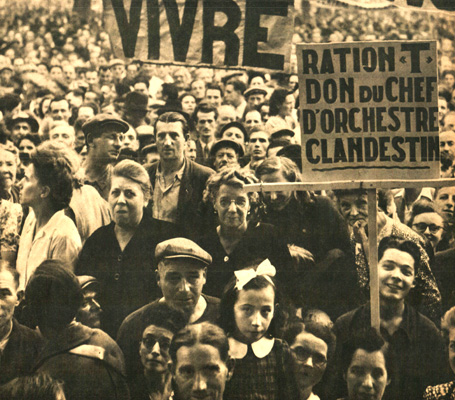 The political winds in Paris were blowing in an Easterly direction.

The political winds in Paris were blowing in an Easterly direction.

News for this July 23rd in 1947 had to do with the delicate balance being struck throughout postwar Europe, and fears the unity was falling apart. The Big Three Conference was underway with discussions regarding the proposed Marshall Plan and the work-slowdown by Coal Miners in the Ruhr Valley of Germany and the fear generated from France that Germany’s industrial revival would lead to a return to German nationalism. The Communist Party in France was gaining a strong foothold in French society and the concern was the current government in Paris would topple, being replaced by a Communist one with leanings towards Moscow.

The Coal production from the Ruhr Valley was crucial in the postwar reconstruction of Europe and the work slowdown meant much needed shipments of coal weren’t coming, and that the U.S. was now having to ship some 35 million tons in order to aid the crisis.

While the Big 3 Conference was tackling the crucial issues in Europe, life on Capitol Hill was far from sublime and the scheduled recess until September left a lot of issues hanging. Talk of a scandal brewing in the area of Withholding Tax by companies, with many companies not turning over the taxed income to the government. A housing crisis was developing in California over Migrant workers and government funding to continue providing shelter for farm workers was to stop on September 30th. Already, there were some 30,000 homeless migrants camped out along highways in California’s Central Valley. If nothing was done to reverse the deadline, the number of homeless would grow substantially higher.

Meanwhile, Georgia was awash with tobacco on the occasion of the annual auction which brought farmers from all over the state looking for good prices. The prices fluctuated over the course of the day, but it was a yearly ritual nonetheless.