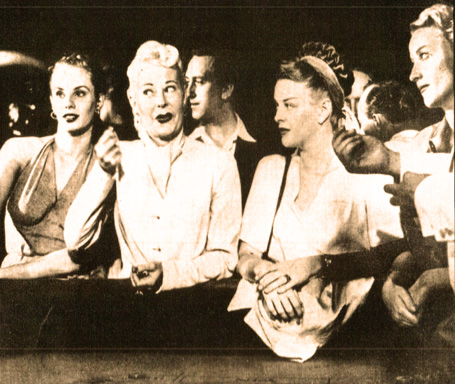 Monte Carlo gets its first big dose of Americana; the Crap Table.

Monte Carlo gets its first big dose of Americana; the Crap Table.

Certainly not a dull week in history, this July in 1949. Starting off with fears and accusations coming from Britain over post-War Germany and a repudiation of claims from Sir Winston Churchill that he demanded total destruction and complete surrender of Germany at the end of World War 2. The trouble was, his old speeches came back to haunt him. Much of this had to do with the economic drain on the former allies and the new threat of Communist takeovers in Eastern Europe by the Soviet Union. Although reports from the State Department claimed the Russians had given up on the Berlin Blockade and a level of autonomy had been reached in Austria, it was still having an unsettling political effect on Westminster.

Meanwhile, the NATO Pact was being adopted amidst condemnation from Moscow. And the Cold War roared on.

On the subject of Communists – The HUAC (House Un-American Activities Committee) Hearings heard from baseball icon Jackie Robinson on the unfounded rumor that Communists were gaining a strong foothold in the Black community. Based on a recent address given in Paris by singer Paul Robeson, praising Moscow and the Communist way of life, it fueled alarmist speculation that Robeson spoke for the entire African-American community, and that was good for jangling a few nerves. Robinson dispelled the rumors, but also added the subject of racial discrimination in America was the elephant in the living room.

But Communist hysteria was seemingly everywhere, with reports that Actor and Actors Equity President Clarence Derwent was held for several hours of questioning on his arrival in New York from performing Shakespeare in Sweden. It seems the State Department had a case of mistaken identity going on. The tacit apology didn’t do much to soothe the outrage from Derwent.

Meanwhile, the ever-present subject of the Economy lumbered on. This time it was a question whether or not we were in a full-blown Depression. Some pundits said no, while others pointed to the steep rise in unemployment and said yes.

Depression or not, it didn’t stem the resurgence in popularity of slapstick comedies of the 1920’s, reissued in movie theaters around the country. Nor did it stem the curious popularity by Casino patrons in Monte Carlo to that latest American import; Craps, or Les Craps as it was known, when the first tables were set up this week and the dice rolled.

And so went that particular week of July 24th in 1949, as reported on NBC Radio’s Voices And Events.