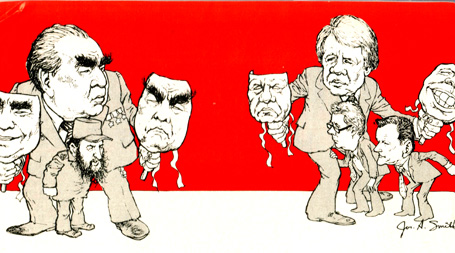 Which was strange, since it was also announced, via his first Press Conference that General Jones was gearing up for resumed SALT Treaty talks with the Soviets. Awkward.

And there was that dock workers strike in Scotland that got London riled up. Seems they were refusing to load the docked British Navy nuclear subs. To which the government vowed they would either do the work or the Navy would. So there.

And at home – it was grumbling on Capitol Hill over food prices, which shot up 16% the past year. Finger pointing in all directions for the unreasonably high prices, but mostly the blame rested squarely on the shoulders of Inflation. Assurances the rate would go down to 8% by the end of the year.

All that and a lot more via The World Tonight from CBS News, this July 25, 1978. Note: apologies for the bad sounding tape. It was damaged.