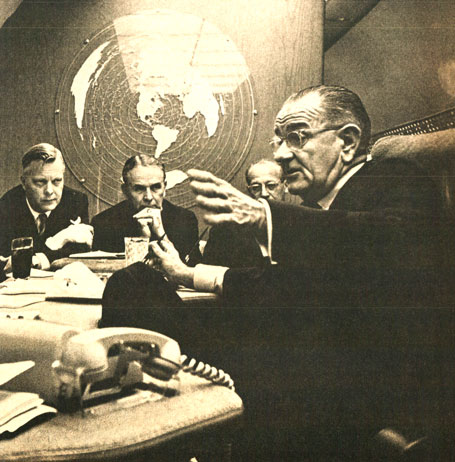 Heading for the Game Changer.

Heading for the Game Changer.

Living on the edge in 1965. A lot was hanging in the balance for this 27th day in July, 1965. President Johnson was meeting with Democratic Congressional leaders this particular morning for a consensus on the situation in Vietnam. At issue was the question of increased troop deployment, which meant calling up the Reserve units and increasing the Draft quotas. In short, getting us deeper in a War people were beginning to have questions about.

And the questions were many – especially at the opening of the Democratic Governor’s Conference in Minneapolis where vice-President Humphrey was expected to be in the hot seat over the matter of Vietnam. And domestic problems factored in there too – but Vietnam was the hot-button subject of the day.

President Johnson was expected to make a nationwide address with the following 24 hours when a final decision had been reached.

Meanwhile, the Geneva Conference on Nuclear Disarmament began with France boycotting the talks. Red China wasn’t invited, because it’s never been invited. The talks were between three powers; the U.S., Great Britain and the Soviet Union. Expectations weren’t high, considering the Vietnam question looming. And the world was still living on the edge.

In other parts of the world and in other areas of the country – In Britain, a successor was under consideration to replace departing Sir Alec Douglas Home. In New York, Mayor Wagner had just tied the knot with the former Barbara Cavanaugh and were heading to parts South.

Free Speech Movement leader Mario Savio was sentenced to 4 months in jail for his role in the 1964 UC Berkeley Strikes and demonstrations. A 24 hour strike by workers in Greece was quickly stifled when the action was deemed illegal by the Greek Government. Trouble was brewing in Athens by the hour. In Americus Georgia, members of the SCLC (Southern Christian Leadership Conference) and SNCC (Student Non-Violent Coordinating Committee) met in order to explode the myth of racial harmony in Georgia.

On Capitol Hill – the House was busy debating the Bill to nullify State Right-To-Work laws, or Section 14b of the Taft-Hartley Bill. The house was expected to approve LBJ’s Housing Bill though.

And author Eugene Burdick, who gave us Fail-Safe and The Ugly American, collapsed and died of a massive heart attack while on a tennis court in San Diego. He was 47.

And that’s just part of what went on today, as reported locally in New York over WCBS-880 and by The CBS World News Roundup for July 27, 1965.