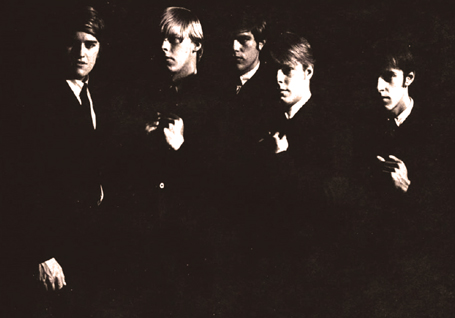 I originally posted this track a couple years ago on my now-defunct Newstalgia site. I realize there are a bunch of you out there who are new to this site, never having heard of the old one, so all this is new to you.

And even if you’ve been following the old site, this is still a great almost totally unknown track by a band that quick got pigeonholed as a One-Hit Novelty Act. Which was a shame, as The Rainy Daze had a lot more to say than merely Acapulco Gold (their big claim to fame).

Tonight it’s the follow-up single, first issued in May of 1967 under the title Fe-Fi-Fo-Fum and later reissued around August as Blood of Oblivion. Despite the title change, it didn’t fare well for the band and the single went almost nowhere. I remember hearing it once when it first came out via my local Top-40 station, and then it was never heard from again. Sadder, this track never wound up on the debut Rainy Daze album and has subsequently never been reissued by anyone even recently (as far as I know). Making matters worse, the original 4-track masters were destroyed in the great fire at Universal City a couple of years ago. So the likelihood of hearing a Stereo version of this track are remote at best.

But with all that in mind, you can’t keep a great song down and this is one of the many overlooked classics that are hidden away on the b-sides of singles, or the dusty tape shelves or the initially poorly received follow-up singles.

It’s all history, it’s all music and it often makes no sense.

But enjoy it anyway.