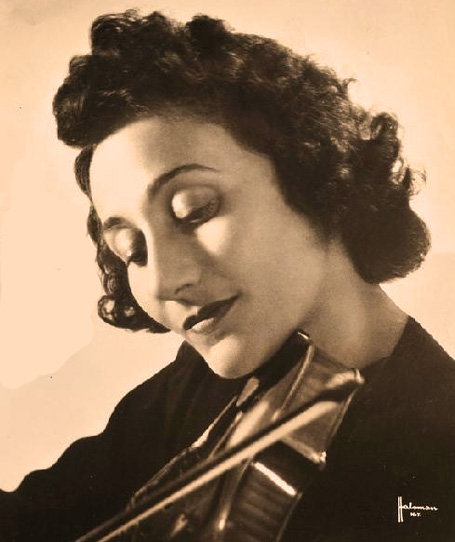 Erica Morini - once referred to as "the most bewitching violinist of the 20th Century".

Erica Morini – once referred to as “the most bewitching violinist of the 20th Century”.

Another live broadcast transcription this weekend. This time it’s The Los Angeles Philharmonic, conducted by Alfred Wallenstein and featuring the legendary Erica Morini in concert, recorded on January 17, 1954 for the Standard Hour radio program.

This excerpt, from the original one hour broadcast, features Erica Morini in the Glazounov Violin Concerto.

Erica Morini was one of the giants in violin playing. Having made her debut in 1916, she was active all the way until 1976 and passed away in 1995. At the time of her death she was considered to be the last performer who recorded in the early days of the recording industry, having made her first recordings in 1921 for RCA Victor, and continued all the way well into the stereo era, until her retirement in 1976.

In 1916 Morini gave her first orchestral concert in Vienna. Josef Krips, who was three years older than she, was in the audience: “She was a very young thing, I can still see her with the blue bow in her hair. She interpreted the A-Major Violin Concerto of Mozart wonderfully. … I remember in the second movement she was suddenly playing all alone. The orchestra had taken a break, so to speak. She refused to be deterred and just kept playing. After about ten seconds, the orchestra found its place again.” Arthur Nikisch heard the young girl and invited her to Berlin, where she appeared two years later under Wilhelm Furtwängler. She described her concert under Nikisch with the Leipzig Gewandhaus Orchestra in 1919 as “the most important experience of my life. I was the only child who had been allowed to play there.” After this concert, Nikisch expressed his profound admiration: “This is not a Wunderkind, it is a wonder—and a child.” This catchy comment was quoted again and again in concert reviews.

A remarkable figure in music and regarded as one of the finest soloists of the 20th Century, Erica Morini’s recordings have been reissued, particularly in Japan where she is still celebrated as an icon of the instrument.

This recording is doubtful to have been reissued. If it has, its been well out of print. But I suspect it hasn’t ever seen the light of release. So this is most likely a rarity and a first.

In either case, enjoy.