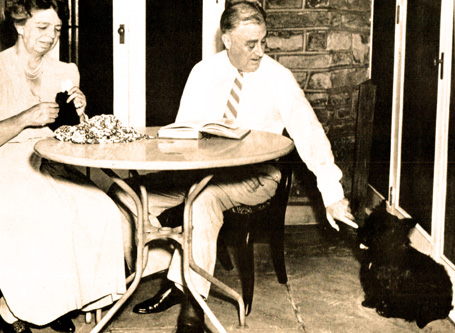 Day 13 of a sweltering heatwave - even Falla seemed listless.

Day 13 of a sweltering heatwave – even Falla seemed listless.

As the Nation’s Capitol sweltered for its thirteenth consecutive day, this July 31st in 1940, the news was appropriately sparse and the events were comparatively few.

Starting with news from London that overnight raids by German bombers on Southeast and Southwest England and parts of Wales did little damage. On the diplomatic front, efforts were underway to gain release of some 11 British subjects being held by the Japanese for unknown reasons. With anti-Japanese sentiment rising in Britain, the Japanese Embassy in London expressed powerlessness in being able to offer help. At the time of the newscast, two Britons were released, but an additional British subject was being held.

Meanwhile, Parliament voted to extend the blockade of shipping to France and other countries under Axis control. This was worrisome to the French as food shortages were spreading all over France.

From Berlin came reports that Japan expressed concern over the U.S. embargo of shipments of war materials and was considering cutting off shipments to the U.S. of rubber from Malaya and the Dutch East Indies in retaliation.

Back home – amid reports of the heatwave gripping Washington also came word that the Senate Military Affairs Committee gave a hasty okay to President Roosevelt’s proposal to mobilize some 300,000 National Guard and Reserve Officers for one year of military training. Dropped like a hot potato was a proposed Conscription Law with overwhelming sentiment that there should be no peacetime draft.

And that’s what this last day of July sounded like in 1940, as reported on the NBC News Of The World.