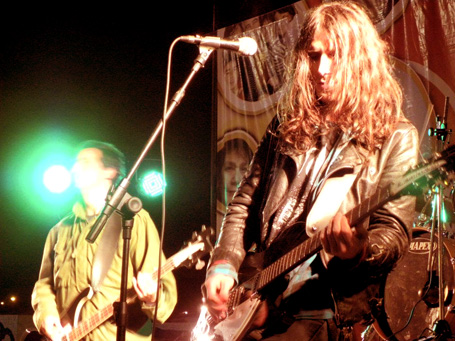 The Ganjas - blowing minds in Santiago and everywhere else.

The Ganjas – 2012 – Nights At The Roundtable: Rock Without Borders Edition

The Ganjas – blowing minds in Santiago and everywhere else.

I haven’t posted anything on The Ganjas in a while. To get you up to speed; if you missed the last post I did on them, The Ganjas are a neo-psych/shoe-gaze/indie/experimental band from Santiago Chile. I first discovered them on MySpace about 5 years ago and was suitably blown away by them and had high hopes the world was going to know about them sooner or later. In that time they’ve been touring a lot, recording a lot and making a name for themselves everywhere from SXSW in 2010 to most of the festivals in Europe and certainly gigging all over South America.

An amazing band and another reason to keep an open mind as far as new music is concerned. You’ll quickly notice it’s everywhere and it’s good and it’s happening in every country in the world. A lot of it is in English (like tonight’s track), but much of it is in it’s native tongue, and that shouldn’t keep you from enjoying it and exploring on your own. The Ganjas is a good place to start.

Tonight it’s a recent track, Raise which came out earlier this year or late last year. I don’t know what their plans are right now. I think they are hitting the road, but I don’t know where.

Just remember the name – you’ll be hearing more about them soon.