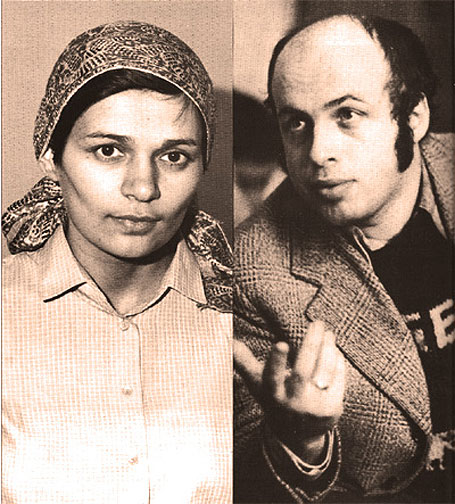 Avital and Anatoly Sharansky - She lobbying - He languishing in 1978.

Avital and Anatoly Sharansky – She lobbying – He languishing in 1978.

Click on this link for the audio player: News for August 1, 1978

News for August 1, 1978 had much to do with rumors surrounding a pending major East-West Prisoner exchange. At the center of the rumors was Soviet dissident Anatoly Sharanksy and hints he would be swapped for 2 Soviet Spies being held in the U.S. Speculation was fueled by the sudden cutting-short of a lobbying visit to New York by Sharansky’s wife Avital and an eerie silence from Washington along with purported talks going on simultaneously in Washington, Moscow, Bonn, Berlin and Vienna. The plot was thickening.

Meanwhile the House, by squeaker vote of 208-205 went along with the Senate in lifting the embargo of arms sales to Turkey. The lifting came with conditions, the most notable being Turkey’s continued good behavior with reference to the “Cyprus problem”.

Secretary of State Cyrus Vance was heading to the Middle East again, this time carrying a ring of pessimism over Egypt’s unwillingness to continue peace talks with Israel over the matter of what constitutes Sovereign territory.

Shipping heiress Christina Onassis was heading to the alter again, this time in Moscow.

And Boeing was getting raked over the coals for handing out a purported $50 Million in payoffs to various companies and individuals, including some who just didn’t need it.

All this and much more for this August 1, 1978 as reported by Douglas Edwards on The World Tonight from CBS Radio.