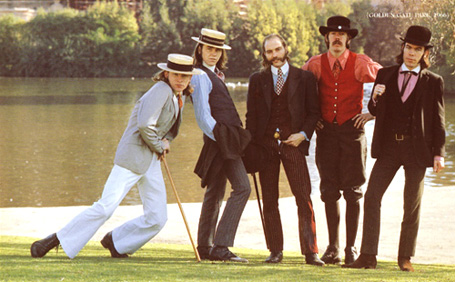 The Charlatans - 1966. One of the most influential bands from the Bay Area that almost no one has heard of.

The Charlatans – 1967 – Nights At The Roundtable

The Charlatans – 1966. One of the most influential bands from the Bay Area that almost no one has heard of.

Clink on the link for the audio player: The Charlatans – We’re Not On The Same Trip – 1967

As strange, capricious, faulty and downright ignorant as the music often business is, the tragic neglect and criminal mishandling of one of the most influential and charismatic bands to come out of the Bay Area scene of the mid 1960’s looms very high in the story of The Charlatans.

A band that, for the most part, defied description and whose members would eventually splinter off to other bands, The Charlatans were plagued by bad luck, bad timing and poor choice of record companies. Initially picked up by Kama Sutra Records (who had a string of hits with The Lovin’ Spoonful), they were oddly perceived as a sort of novelty group, whose dress confused record executives. Their initial single was a cautionary tale written by Folk legend Buffy Saint-Marie in the form of Codine Blues. Mistaking it for a pro, rather than anti-drug song, the record company quickly shelved the single, substituting it for another less controversial tune, but it failed to generate any top-40 airplay and the label lost interest in the band, pretty much abandoning them at the starting gate.

A popular band on stage, and particularly in the Bay Area, it wasn’t until 1969 that their first album was released, made up of songs they recorded in 1966 and 1967, that they got any attention. But by that time the band broke up and co-founder Dan Hicks was busy making a name for himself with The Hot Licks.

By way of reissues, The Charlatans have gone on to achieve legend status as unsung heroes of a fledgling musical movement in the 1960’s and have reunited in recent years, playing to an audience who have discovered them years after the fact.

Tonight it’s one of the tracks recorded during a productive series of session at Golden State Recorders in July 1967. We’re Not On The Same Trip is a Dan Hicks song, and you get some idea of what was lurking in the wings for his Hot Licks a year later. But at the time nobody knew that.