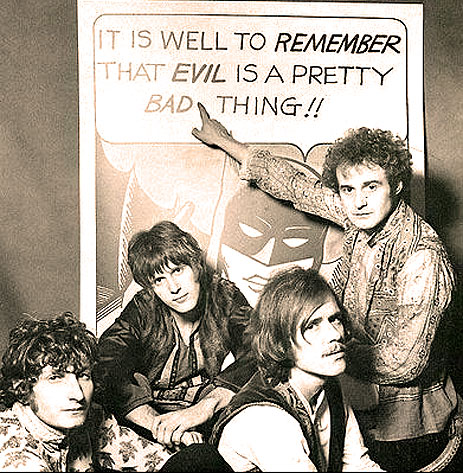 The Nice - laid the groundwork for what was to come later.

The Nice – laid the groundwork for what was to come later.

Click on the link here for audio: The Nice – Swedish Radio Sessions – 1967

One of the mainstays of the early Prog-rock/Art-Rock genre were Emerson, Lake & Palmer. Their popularity was enormous worldwide and their fans ran the gamut from mainstream pop enthusiasts to hardcore stoners.

But that was the 70’s. Tonight it’s an incarnation from 1967 in which the common link is keyboard maestro Keith Emerson. The Nice came on the scene right at the time of Psychedelia and were a sizable hit with audiences. They blended an interesting mixture of Pop, Psych, Jazz and Art-Rock into one relatively seamless presentation and had an enthusiastic following as the result.

For this Roundtable it’s a very rare live session done by The Nice while on tour in Sweden. Recorded by Sveriges Radio with a reasonably sedate audience, this live document of The Nice offers a few disappointments. First off, the vocals were not the strong suit of The Nice, and Keith Jackson’s voice is flat a lot of the time, a well documented weak aspect of the band which probably hampered their universal success.

But that’s a small nit to pick for an otherwise long-thought-lost radio session by a band that, at the time were just getting ready to release their first album and were destined to do great things.

What’s on the player tonight:

What more than makes up for any vocal deficiencies is the fact this recording is so good and is something of an anomaly for a period of time where live recordings were rare and well recorded ones even rarer.

It’s safe to crank this one up and get ready for the weekend.