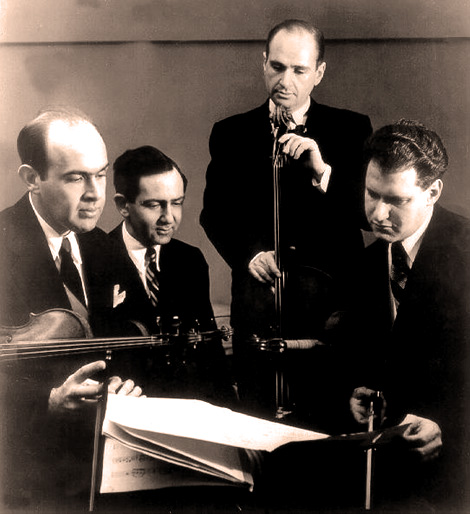 The Stuyvesant Quartet - History making on the fly.

The Stuyvesant Quartet – History making on the fly.

I originally posted this in 2009 on the now-defunct Newstalgia site. It’s such a good and historic recording that it would be a shame not to include here on Past Daily.

One of his most popular Chamber pieces, the op. 57 Piano Quintet had its premier in Moscow in November of 1940, with Shostakovich at the piano and The Beethoven String Quartet, the group he dedicated the work to. Within weeks, the manuscript was in New York and had its American premier with Vivian Rivkin at the piano with the Stuyvesant String Quartet. This recording was made on May 7-8 of 1941 and there is some controversy whether this recording was the world premier or the recording made by Shostakovich himself with the Beethoven Quartet was the world premier. It’s sort of a moot point, considering there was a war going on and records were something of a luxury commodity at the time, and access to Soviet recordings was never easy anyway.

In any event, this recording was made shortly after the U.S. Premier and strangely, it’s never seen the light of reissue, even as a historic document. It’s been recorded scores of times since the premier, with no doubt infinitely better interpretations. But with all that said, this is the first one, or the first Western one and it was the only recording for some time. And a lot of people formed their first impressions on the piece based on this interpretation.

So imagine you’ve never heard this work before.