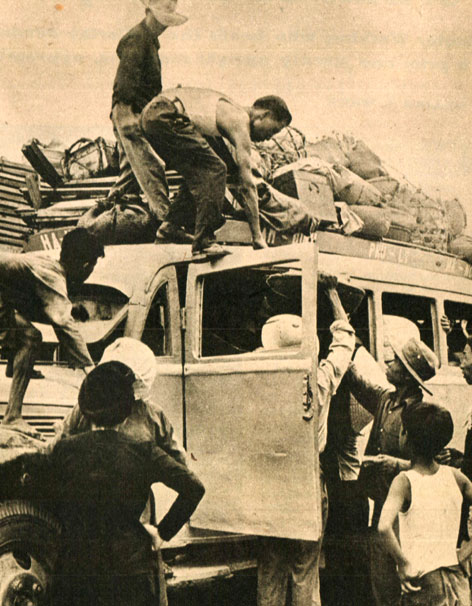 The exodus from Hanoi in 1954. Glimpses of the future.

The exodus from Hanoi in 1954. Glimpses of the future.

August 7, 1954 – the big news (at least for the U.S.) was the weather. Signs that things were turning around in the Midwest for the worst drought in a long time. Much needed rain was predicted. But that didn’t mean the drought was over – just looking positive.

Meanwhile, an inquiry was called for in the sudden death of Emily Dionne. Dionne, one-fifth of the famous Dionne Quintuplets of 1930’s fame, had suffered three strokes previously and was left unattended when the fatal one hit.

The British Empire Games going on in Vancouver were bracing for the appearance of Roger Bannister in the upcoming track meet. Bannister was the first runner in history to break the 4-minute mile earlier in the year and was facing stiff competition.

From Paris came word that the ceasefire was still on for a week from this day in Vietnam and the region. The French pullout was imminent and refugees were clogging the roads out of Hanoi in anticipation.

On Capitol Hill, debate over censuring Senator McCarthy was put on hold until after the mid-term elections in November. Former President Harry Truman proved to be a good fundraiser, based on his previous nights appearance and topping out the contributions at a DNC dinner in Kansas City to over $1 million.

And information over the disappearance/defection of Dr. Otto Jahn, Head of the West German Intelligence Service, was being actively pursued with a handsome reward attached. Seems it was still unclear if Jahn defected to East Germany or was abducted by Soviet spies.

And that’s just some of what went on this August 7, 1954 as reported by Alex Drier And The News.