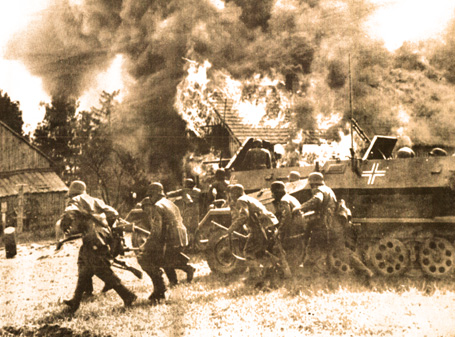 Both sides downplaying the body count.

Both sides downplaying the body count.

Clink on the link here for Audio player: News for August 8, 1941

News for August 8, 1941 focused on the War in East with reports of German advances 130 miles into The Ukraine. Depending on who gave the accounts, the casualties were staggering. Germany claimed 200,000 Russian losses with 130,000 prisoners. Other sources claimed the casualty figure was considerably higher and the prisoner rate was lower. News from Moscow was brief and only to say Russian bombers had successfully staged a raid over Berlin the previous night.

Reports from Istanbul, Turkey claimed German Secret Service agents were en route to Tehran to orchestrate a takeover of Iran and attempts to gain influence in the region had been stepped up.

From Washington came reports that, despite the Senate passing an extension on Draftee time to 2 years, it was expected to face stiff resistance in the House. Sources reported the bill may pass with only a five vote margin. Pet peeves by some Congressmen were being blamed for the lack of support and stiff opposition, with the full brunt of the anger to be directed at the proposed St. Lawrence Seaway bill uner consideration.

And that was a taste of life on planet Earth, this August 8th in 1941 as reported on News Of The World from the NBC Blue Network.