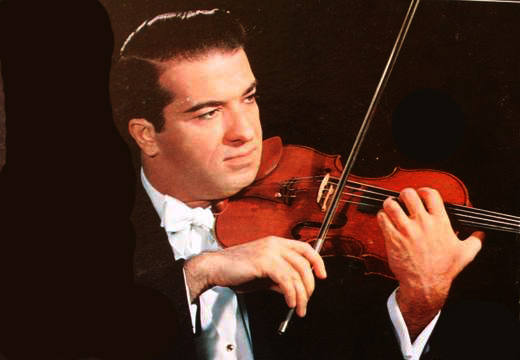 Editors note: This was originally posted on August 9, 2012, a few days after the death of Ruggiero Ricci.

It was with a great sense of sadness that I heard about the passing of the legendary violinist Ruggiero Ricci this past Monday (August 6th). A musician whose work I certainly grew up with and enjoyed greatly. During a time when there were a lot of musical giants in our midst, he stood out as one of the best.

Aside from performing over 6,000 concerts in 65 countries during his 70-year solo career, Ricci also made over 500 recordings, on every major label. He taught violin at Indiana University, the Juilliard School and the University of Michigan. He also taught at the University Mozarteum in Salzburg, Austria. Ricci held master classes in the United States and Europe. He wrote Left Hand Technique, a pedagogical volume for violin published by G. Schirmer.

Ricci owned many precious instruments, including the Guarneri Del Gesù violin known as the ex-Bronisław Huberman of 1734, a Storioni, a Luiz Bellini, a Curtin & Alf, a David Bague and a couple of Regazzi. He played, on September 18, 1997, his fourth recording of the Paganini Caprices on Paganini’s own Guarneri, Il Cannone, on loan to him by the City of Genoa, Italy.

Ricci died of heart failure in August 2012 at his home in Palm Springs, California, aged 94.

So this week, rather than our Summer perusal of the Festivals in Europe, I thought I would offer a unique concert as way of tribute to the memory of a gifted and talented performer whose artistry enriched the lives of countless audiences.

This one is a rarity – I don’t think it’s been heard by very many people, or almost none. It’s a Hollywood Bowl concert from July 13, 1965 featuring the Los Angeles Philharmonic, guest conducted by another legend, Hans Swarowsky with Ruggiero Ricci as violin solo in the Sibelius violin concerto.

Here’s the rundown. It’s broken up over two players and there are no announcements. This is the raw, unedited tape recorded as it happened.