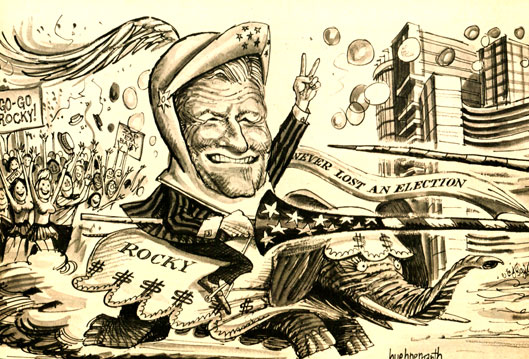 Nelson Rockefeller - representing the all-but-extinct Liberal wing of the Republican Party in 1968.

The Liberal Republicans In 1968 – Past Daily Reference Room

Nelson Rockefeller – representing the all-but-extinct Liberal wing of the Republican Party in 1968.

Yes, there really was a Liberal wing of the Republican Party. But as of 1968 it was scarcely noticeable. Headed up by dark horse/longshot Presidential candidate Nelson Rockefeller (who himself was once a New Deal Democrat), Rockefeller appealed to the Youth Vote among the Republican Party. And even though his chances at winning the nod for the party’s nomination were slim, there were still grumblings and attempts to keep the Liberal wing alive.

Here is a report, via NBC Radio’s Emphasis series, from August 10, 1968, while the Republican Convention was taking place in Miami, on the subject of Rockefeller and the Youth Vote.