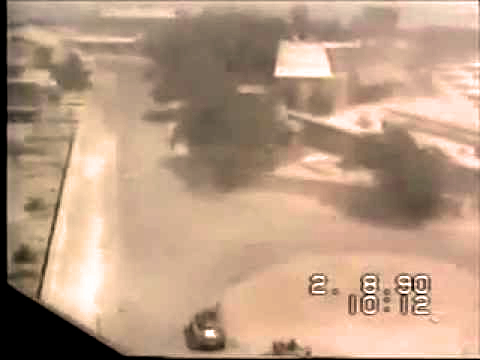 The sound of sabers rattling and reports of atrocities, chaos and quickly organized summits dominated the news for this August 10th in 1990.

With the Iraqi invasion of Kuwait only a few days old, Egypt opened an emergency Arab Summit in Cairo as a last ditch effort to prevent an escalated war in the Persian Gulf against Iraq. But at the time of this broadcast, very little was accomplished, except when to break for lunch. Iraq sealed its borders to all but diplomats, and reports came flooding in of foreign nationals escaping in the droves, while some were being held in Bagdhad, perhaps as hostages. The ones who escaped gave harrowing accounts of what was going on in Kuwait and it fueled the already growing outrage against Iraq.

Meanwhile, NATO leaders were stopping short of taking collective military action, but they did endorse the growing multi-national Naval presence shaping up in the Persian Gulf. And the U.S. began a rapid deployment of U.S. combat troops to the region, denying reports it would eventually deploy as many as 250,000 personnel to Saudi Arabia.

Back in the States – wild fires were continuing to cause major destruction in Oregon and Northern California, charring some 100,000 acres as of this morning. Yosemite National Park was closed and all roads leading into the site were blocked, leaving many campers stranded. As of this August 10th, there were some 1,000 fires burning out of control in the region.

And that’s some of what went on, this chaotic August 10th in 1990, as reported on The CBS World News Roundup.