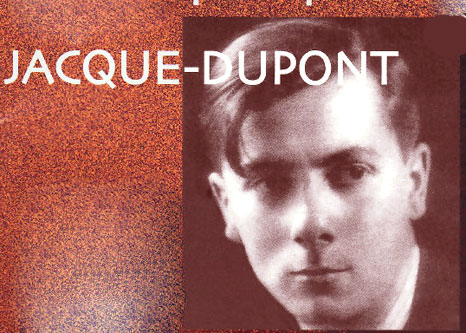 Click on the link here for Audio Player: Jacque-Dupont – Divertissement for Piano And Orch. 1948

Sometimes history can be frustrating. In the case of this recording, it’s a matter of damaged discs coupled with not the best recording at the time. A world premier performance of the Divertissement For Piano and Orchestra by the 20th century composer Jacque-Dupont (or Jacques Dupont depending on which entry you read), recorded as it happened in 1948 by French Radio. It features the composer at the piano and the Paris Conservatory conducted by Pierre Michel LeConte. First off, the levels jump all over the place, from under-modulated to bordering on distortion between the piano and orchestra, which means the engineer at the time was having a problem keeping the balance and the levels together. Okay, there’s that. And then there’s the transcription disc itself, which has seen better days and wasn’t stored in the best possible conditions – so it’s riddled with ticks and pops.

Jacque Dupont ( Paris , August 7 , 1906- Troyes , March 21 , 1985) was a French pianist and composer. His mother was a pianist, at five, he played the sonatas of Muzio Clementi , and at the age of eight, in 1914, a concerto for piano and orchestra by Handel . He entered the National Conservatory of Paris in 1915 , and studied with Alfred Cortot .

He composed works for solo and orchestral piano, symphonies, ballets and sacred music, as well as film scores, including Dernier Métro (1945) and Error Judiciaire (1948).

On to the recording at hand; I tried my best to compensate for all those things and I offer apologies up front if the sound isn’t the best it could possibly be.

But with that said, this is an engaging work by an almost totally unknown composer (here in the U.S.) and it’s the world premiere. So it’s important on a lot of levels. Ultimately, the ride will be worth it – even though the car is in bad shape. But like I said, history can sometimes be very frustrating.

Enjoy it in the spirit it’s being offered.