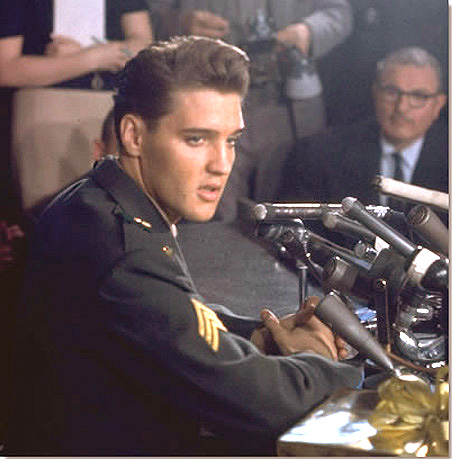 Elvis Presley Has A Word Or Two – 1960 Interview – Past Daily Pop Chronicles Special.

Click on the link here for Audio player: Elvis_Presley_Interview_March_1960

Thirty-five years ago today the sad news flashed around the world that Elvis Presley, the King of Rock n’ Roll had suddenly died. Tributes came pouring in and most every radio and TV station had some sort of remembrance of one of Pop Music’s most enduring icons.

And thirty-five years later the remembrances are still pouring in. So with that, I thought I would offer something slightly unusual – an interview Sgt. Elvis Presley gave for Armed Forces Radio as he was being discharged from his 18 month commitment on March of 1960.

Here is the complete interview, and a reminder if you’ve heard it, and a chance to discover it if you haven’t.