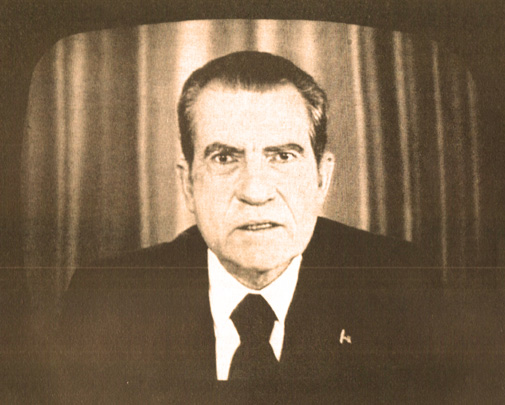 Nixon on Watergate - With each new appearance, the defense becomes flimsier.

Nixon on Watergate – With each new appearance, the defense became flimsier.

Click on the link here for Audio Player: News for Week ending August 17, 1973

News for this week, that also ended on August 17th in 1973, had much to do with the ever-growing Watergate story. Once again, Nixon came before the nation to offer an explanation over Watergate, over the indictments, over the hearings, and the public was buying it less and less. So little in fact, that his popularity was dropping to all-time lows, and even the end of our involvement in Cambodia brought no needed boost.

It was true our official involvement in Cambodia had drawn to a close, an involvement that brought about a national outcry and deadly force three years earlier.Little by little, our unpopular excursion into Southeast Asia was coming to a close.

Aside from Watergate, we were also concerned with the economy. The phrase “Inflationary Recession” was being bandied about on Capitol Hill and food prices were going through the roof. The Doomsday scenario of Depression was being glanced at more than once.

But on the lighter side, early Screen legend and Sex Siren Mae West was celebrating a birthday this week. Sources close to the actress were unsure if she had turned 80, 81 or 82 – and she was offering no help. Sex Sirens never really age, they just gain respectability.

And that’s how this week rolled as reported on the CBS Radio Program The World This Week for August 17, 1973.