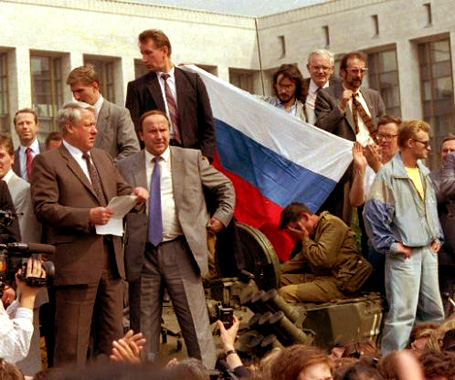 Boris Yelstin - no way was the Genie going back in the bottle.

Boris Yelstin – no way was the Genie going back in the bottle.

News for this August 21st in 1991 had to do with the shocking turn of events in Russia. In the early hours of the morning, a coup staged by Kremlin hardliners ousted Mikhail Gorbachev and attempted to overthrow the government in an effort to re-establish the old Communist hierarchy and suppress the new freedoms brought about by Perestroika and Glasnost. As tanks and troops, loyal to the hardliners marched through the streets of Moscow to seize the Parliament Building, fears that Russia would now slip back into the patterns of the Cold War brought thousands into the streets to protest, led by opposition President Boris Yeltsin.

Here are the early reports, via NPR’s Morning Edition from August 21, 1991, when news was sketchy and confusion was everywhere.