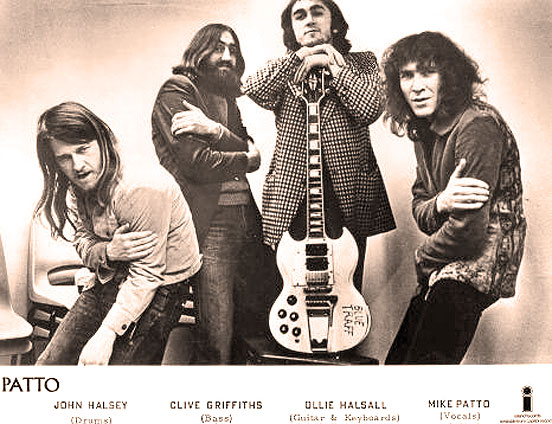 Patto – In Session 1973 – Nights At The Roundtable

Patto: File under Neglected, Underrated and Ignored – the collective “ouch”.

Anyone who has a passing fancy in anything other than Pop Music will quickly realize the shelves of any self-respecting collector are fairly bulging with albums by bands that never got recognition, never sold very well, got lost in the shuffle or just flamed out too early.

Patto is one of those bands that fit nicely into any of the above categories. Fronted and named after lead singer Mike Patto, Patto started off in 1970 with a goodly amount of potential, but sadly their first album, recorded for the fledgling eclectic label Vertigo, didn’t sell well and, such was the case (and still is) with most major labels, were dropped. They were quickly picked up by Island Records and recorded a memorable album which got good press and a U.S. tour, but again no sales.

All in all, Patto were together a scant three years. They have been variously described as a Progressive Band and a Hard Rock Band. And from what I remembered of them, they tended to gravitate more towards Hard Rock than Prog, even though the lines at the time were a bit blurry. Today we would call them Alternative. But in 1972, that genre didn’t exist.

Tonight it’s a session they recorded for John Peel at The BBC on February 12, 1973. A few months later the band would dissolve and go their separate ways, with Mike Patto and Ollie Halsall teaming up to form another ill-fated band, Boxer. Mike Patto died in 1979 after a short bout with Cancer. There have been various stabs at forming a reunion (of sorts) Patto, but frankly . . .it just isn’t the same without Mike.

Here is what’s on the player tonight:

Don’t forget to support the up-and-comers – they need it and dread being ignored and overlooked.