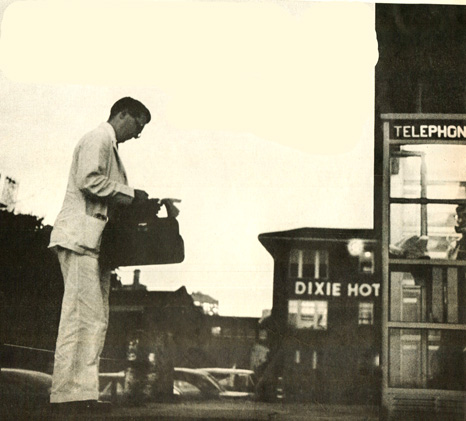 Back then they did house calls too.

The Healthcare Debate Of 1956 – Past Daily Reference Room

Yes, they made house calls too.

Click on the link for Audio player: Healthcare Debate – 1956

At the risk of sounding like a broken record and belaboring a point over and over, the argument over Universal Healthcare, Affordable Healthcare, proposed legislation for some subsidized Healthcare are all old issues. Issues that have been at forefront of the American consciousness for over 100 years. And here is another example of just how ingrained the opposition is and how little that opposition has changed. And how even the rest of the world marvels at our situation.

On January 29, 1956, NBC Radio, as part of their “New World” series ran a debate on the state of Healthcare in the world and asked the BBC to participate with their take on it. Representing all the interested parties were Aneurin Bevan, Member of Parliament and Labor Party Secretary for Health, Dr. Walter Elliot, Member of Parliament, E. A. Van Steenwyck, spokesman for Blue Cross and Milton Friedman, economist.

Right away, Bevan and Friedman jump into it. Friedman has a condescending tone that drives Bevan right up the wall and clearly there is no willingness on the U.S. to even consider a National Health plan.

Aneurin Bevan: “If you rely upon financial anxieties to keep people away, or to use your own words, ‘not to overuse the scarce services”, such anxieties do not exist for the rich. So they will have access to the services first of all. Is that equitable?

Milton Friedman : “Mister Bevan, I think you are confusing two very different problems. One, is the problem of the general distribution of income among people, which arises with the respect to food, clothes, housing and everything else. Medical care is a minor item . . .

Walter Eliot: “Now wait a minute – I’m holding myself in with the greatest of difficulty. I was a doctor. I was on the gate. I compiled these waiting lists, and I can assure you that in a good many cases, people who urgently needed treatment weren’t getting it because there wasn’t a hospital accommodation there. Now, one of our difficulties was this very expansion of hospital accommodation. Do you think in America you can look after this enormously increased hospital accommodation which will admittedly be necessary . . .

Friedman: “We don’t rely on donations to run our hospitals. About 90 percent of all the money spent by our voluntary hospitals comes from patients.”

It more or less slides downhill from there. Needless to say, there is no compromise to be had in this debate, but it’s interesting to hear just how enmeshed, even in 1956, the lobbies of big Insurance, Big Pharma and the AMA were with the question of Health for the U.S.