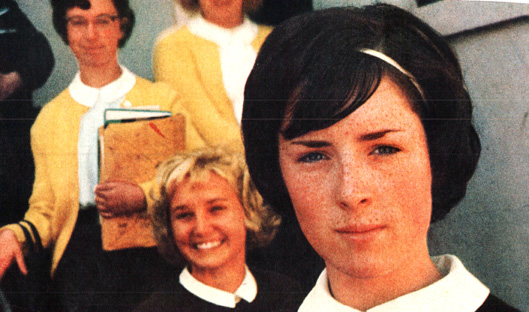 High School students of the early 60's - on the receiving end of political footballs.

High School students of the early 60’s – on the receiving end of political footballs.

Click on the link here for Audio player: The Leading Question – Education Bill -1961

I ran across this Sunday Interview show from September of 1961, part of the CBS Radio series “Leading Question” – it deals with the death of The Federal Aid to Education Bill, introduced during the 87th Congress in the early months of 1961.

Why is this important? Because Federal Aid to Education was high on the agenda of the Kennedy Administration during his first few months in office. And Aid to Education has been something of a political football ever since.

How the Federal Education bill died was due to a lot of political hypocrisy and attachments. It also had something to do with a Summer Recess where factions against the bills passing went into overtime poisoning the waters, so that when Congress reconvened, the bill was dead in the water with no possible hopes of revival.

In this interview – conducted by Bill Downs of CBS News, Congressmen John Brademas (D-Indiana) and Charles Goodell (R-New York), both explained what went into killing the bill and how it happened.

Rep. John Brademas: “Well, I think there were several things. I want to be candid and somewhat critical of my own party if that’s not considered heretical in these matters. I think that, had we driven for passage of President Kennedy’s General Aid Bill right at the start of the session, then there would have been a very good chance of passage of it, because we would have had considerable support from Southern Democratic Congressmen, and I think we would have support . . .more support than we later developed among a number of urban and suburban, especially from the Northeast, Republican Congressmen. But the delay in getting underway enabled this religious issue to be brought into the picture, and of course this is a highly emotional, highly controversial problem, and it sort of threw a cloud over the whole problem. And I would suppose that, as much as anything else if we’re candid about it got everybody very jumpy. I know it was a difficult problem in my own area. So that issue, coupled with the traditional opposition to any aid to Education on the part of a number of Conservatives in both parties, some of the Southern Democrats, the Dixiecrats more than the other Southern Democrats and Midwestern conservative Republicans I think helped to bring about the defeat of the General Aid to Education Bill.”

Rep. Charles Goodell: “Well, the main point that I would make on it is, I don’t believe any of us would accuse the Catholic hierarchy in this country of having killed the bill. I think it goes considerably deeper than that. This is a legitimate issue that needed to be aired and discussed. There are very strong arguments on both sides of the issue. And I think the probably was mainly one of timing. If they delayed it as long as they did, the argument became hotter and hotter and ultimately got to the point where there was no solution at all.”

Brademas: “We saw that there was a certain amount of hypocrisy in the 1957 Congress when about 65 Republican Congressmen, most of them from the Midwest, from my part of the country, very piously went down and made their strong Abraham Lincoln stand, voted for a Civil Rights rider to the school bill and then turned around and voted against it. Now, we’re not supposed to be talking about Civil Rights, but about Education. But I might point out that during the fight on the Civil Rights Bill last year, I saw my good colleague and my neighbor from Indiana, Charlie Halleck, the distinguished Republican Minority leader, frequently rise above principle, which is something of he is most astute, and walk down in the committee in the hall and if there aren’t any roll call votes, and if they can’t find out how you really voted, to vote with those boys from Mississippi and Georgia and Alabama to gut, to take the heart right out of the Civil Rights Bill.”

Replace the word Education with Health Care. Replace Dixiecrats with Blue Dog Democrats and an obstructionist Congress bent on making sure of a one-term Presidency and you start to get an idea of what the potential problems continue to be.

The techniques, the scare tactics, the manipulation and the hypocrisy are alive and well. Just as they were in 1961 when the subject was Aid to Education. And the victims are the same.