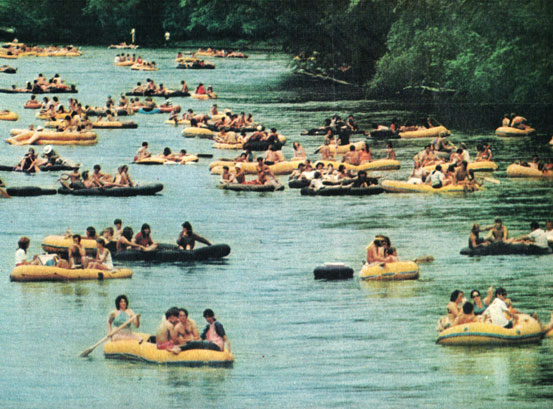 Apparently, in 1974 American culture was heading down the river.

Apparently, in 1974 American culture was heading down the river.

Click on the link here for Audio Player: Where is American Culture Heading? 1974

In 1974 there were grave doubts as to where we were heading as a cultural society. Although 1974 may seem like a banner year for the arts, compared to where we are today.

But the writing was on the wall, even in 1974. And it wasn’t just a case of funding, the world was changing in ways we couldn’t predict, and art for its own sake was fading into a void.

This broadcast, part of NPR’s National Town Meeting from August 21, 1974 features an interesting panel, consisting of Nancy Hanks (NEA) Daniel Boorstin (Library of Congress, though not as of this broadcast), Nora Ephron, Michael Sobran Jr. as well as questions from the audience and a nice outburst midway through.

Clearly, Hanks is an political hack. Chosen by Nixon and going back to the Eisenhower Administration as far as Arts programs were concerned. Boorstin has her back and even goes as far as chiming “what she meant to say was . . .”. So when Ephron asks a few pointed questions, Hanks softballs and pretends they weren’t there. One imagines, out of respect to her boss. Although the condescending tone leaves nothing to the imagination on either Hanks or Boorstin’s parts.

Nora Ephron: “I wonder how you managed to raise 75 million dollars with a President whose views on culture came out a couple of weeks ago in the transcript of that tape as ‘a place for Jews and left-wingers’?”

Nancy Hanks: “President Nixon’s . . . actions, not only personally but professionally in his connection with the arts, his enjoyment of them personally, his actions in supporting this very small Federal agency which is totally opposed to a statement which appeared on the tape. I mean, here is a man who, one of his daughters is very much involved with the arts, the other one likes them very much. He enjoys music too. He’s very proud of his piano playing ability. He took an agency that say, if you want to talk in money terms, was 8 million dollars, and through his strong backing, we were able to increase it last year to some 60 plus and to 75 million this year.”

Ephron: “I’m not a historian, but it does seem to me there are a couple of trends that we might want to talk about. . . when you talk about the high cost of tickets you are also talking about the high cost of producing culture. And one of the effects of this, which has become much worse in recent years is that, what is produced has to be commercial to justify the huge amount of money that’s put into it. And this is affecting all fields, not just film where it’s at it’s most obvious at the moment. The book business is going through a very interesting phase where it’s really shifting from hard cover to mass market publication. And there are only, I think five distributors who handle mass market books. This is going to be a very difficult time for someone to . . it will be increasingly difficult for someone to write an un-commercial book and make a living as an artist. The magazine business, which I’m in is now going through a terrible problem, both with the cost of paper and with postal rates. And one of the results of that is you have some first rate magazines dying that were subscription magazines, and you see flourishing this bottomless pit of men’s magazines which seem to sell for a dollar and a dollar fifty a month, regularly five and six million copies. And these are very serious problems I think the government could be playing some role in.”

But clearly, Ephron points out some issues that would only grow in the years ahead, particularly with writing. The bottom line is, the publishing industry and magazines in particular have been given over almost exclusively to pandering in recent years. They bear virtually no resemblance to publishing in 1974.

I don’t think even Nora Ephron could have anticipated how the arts would be viewed 38 years later.

Or life in general, for that matter.