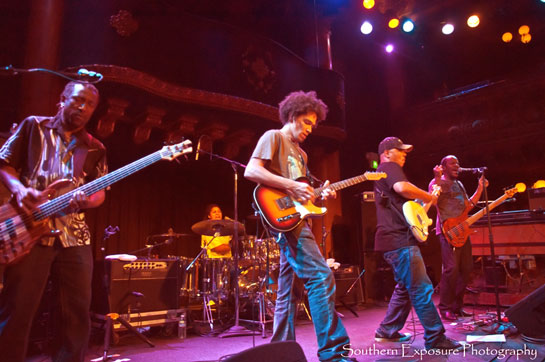 Ivan Neville’s Dumpstaphunk In Session – 2007 – Nights At The Roundtable

Click on the link here for Audio Player: Ivan Neville’s Dumpstaphunk – in Session 2007

Past Daily doesn’t play nearly enough Funk on their nightly roundups. So I’m hoping to remedy that with a taste of New Orleans tonight, by way of the legendary Ivan Neville and his band Dumpstaphunk, recorded in session at KDHX in St. Louis on February 15, 2007.

KDHX, if you haven’t heard about them, are one of the truly committed stations running live sessions of bands passing through the St. Louis area. They have a ton of stuff up on Soundcloud and I would urge you to search out some of the 300+ sessions they currently have up.

Ivan Neville needs no introduction. Part of the iconic Neville family who are synonymous with New Orleans and the rich musical legacy that literally falls out of the woodwork. Going back to Art Neville in the 1950’s, who was one of the early pioneers of Rock/R&B and recorded a string of hit songs for Specialty Records, the dynasty continues with Ivan.

1. What You Want From Me
2. Meanwhile

Time to slip into a groove this week.