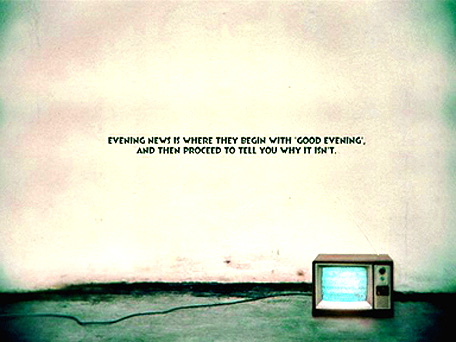 The question is - has it always been bad.

TV News In 1974 – Terrible then – Bliss By Comparison? Past Daily Reference Room.

The question is – has it always been bad.

Click on the link here for Audio Player: Critique of Evening News Shows-1974

Somebody once said the definition of hitting a bottom was when you couldn’t lower your standards fast enough. I have often thought we’ve hit that bottom in 2012. A lot of people thought we hit that bottom in 1974. In comparison, Television News was superior in 1974 to almost anything we have on TV now. But in 1974 it was a far cry to what TV news was like in the 1960’s. And in the 1960’s we had the famous Newton Minow “Vast Wasteland” address about the appalling condition of TV in general, and news was lumped in there with the rest.

So as much as I’d like to say TV news has always been bad, has always focused on the sensational rather than the substantial, I think it’s safe to say we’ve hit ground Zero for the time being. It may get worse in the future; there is always that possibility. And even though we think now that it can’t possibly be any worse, it can always offer a few surprises and take us a few more notches down. Not saying that’s going to happen for sure – but all signs point to it getting a lot worse, rather than a lot better.

So in 1974 they were convinced TV news had reached its nadir. And it was such a cause for concern that NPR devoted an hour of its Town Hall Meeting Of The Air to the subject. New York Times Correspondent Harrison Salisbury, Journalist David Halberstam, former FCC Chairman Nicholas Johnson and former head of CBS News Sig Mickelson were called on to discuss the subject on November 3, 1974. The audience consists of Yale University students (where the Town Hall was held) who ask a number of pointed questions.

Sig Michelson: “I think the Fairness Doctrine is about as required for the human being as a tail, which we long since got rid of when we quit living in trees. I think as long as our broadcasting is operated on the basis of a trusteeship principle which was written into the Federal Radio Act back of 1927 and under the Federal Communications Act of 1934, that the licensing process in of itself is quite adequate to keep a reasonable degree of fairness as long as the broadcaster is a trustee of the public interest. On the other hand, I think it’s a very dangerous commodity as Mister Whitehead tried to use it in his speech out in Indianapolis in 1973 when he suggested that this was a wedge, a weapon the local stations could use to force the networks to knuckle down with their news broadcasting. I think it’s a very dangerous weapon and I would like to see it eliminated, and I’d like to see us go back to where we were before 1949, and operate on the Trusteeship Principle and maintain our fairness on that basis.

Bear in mind that this is before the wave of deregulation during the Reagan years gutted the FCC, converted entire networks into propaganda outlets, turned the Fairness Doctrine into a worthless piece of paper, obliterated newspapers, dismantled Broadcast News Divisions, converted the Trusteeship Principle into a very bad joke and replaced much useful news with team coverage of celebrity rehabs.

In short, made anything you could use pretty much impossible to find. And it’s only gone downhill from there.

But it took a long time in coming. Not overnight as some say.