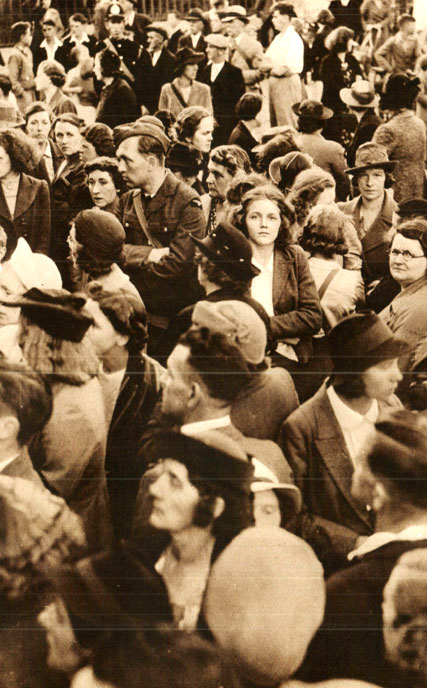 Seventeen days into the start of the War in Europe, news of the day was filled with reports of attacks, advances, retreats, threats, addresses, assertions, denials, and casualties.

Since the German-Russian alliance, Poland was being assaulted on two fronts. Hitler had earlier addressed the people of Germany (and relayed throughout the world) on the Polish situation. Ironically, clandestine radio stations in Germany were calling for the overthrow of the Hitler regime.

Naval action was being reported, with the sinking of British Aircraft Carrier HMS Courageous by German U-Boat, with the U-Boat in turn attacked and sunk by British Destroyers. At the time of this broadcast, it was unclear just how many survivors there were from The Courageous. With a crew of 1260 and a relic of World War 1, the odds weren’t good. And London was issuing daily casualty lists.

Continuing from the BBC World Service broadcast with a report to the U.S. by correspondent John Steele who recorded on reaction to the Nazi-Soviet assault on Poland as well as news of labor strikes in Czechoslovakia bringing swift and brutal reprisals from the occupying Germans, with striking workers summarily executed by the Gestapo. Further reprisals also came in the form of the banning of radios capable of picking up Shortwave broadcasts, with radios smashed and owners arrested.

All in all, it wasn’t looking like a hopeful month, according to the news of this September 19, 1939 as reported by the BBC World Service and American Correspondent John Steele.