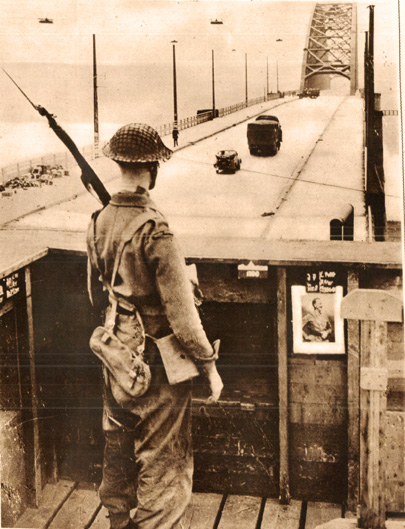 Guarding the Bridge at Nijmegen - the one bridge the Germans didn't get around to blowing up.

September 27,1944 – The Drive East And The Death Of Aimee Semple McPherson

Guarding the Bridge at Nijmegen – the one bridge the Germans didn’t get around to blowing up.

Click on the link here for Audio Player: News for September 27, 1944

News for this September 27th in 1944 was about Allied advances around Belgium and Holland and the first troops to hit German soil. It was also about British airborne troops evacuating positions around Arnheim and hard-fought battles throughout the region. Reports on the capture of the Nijmegen Bridge and defusing the explosives set to destroy the bridge with reports heavy casualties on both sides. Also were Reports on the Balkan campaign with the Russian invasion of Hungary and the move on Rumania.

Despite moves and advances from both the east and west, Germany‘s von Ribbentrop issued a statement, confident the war would be won in Germany’s favor and even though Allied troops were now gaining ground in Western Germany, the advance was only “temporary”. The statement was issued in conjunction with the third anniversary of the Axis alliance signing. With allied planes now bombing islands leading to Tokyo and Mussolini in hiding, there didn’t seem to be a lot of cause for celebration, but they tried.

And reports from Oakland California told of the sudden death of evangelist Aimee Semple McPherson in her hotel room at the age of 53. No cause of death was given.

And that’s how this day rolled in 1944, via the NBC newsroom in New York.