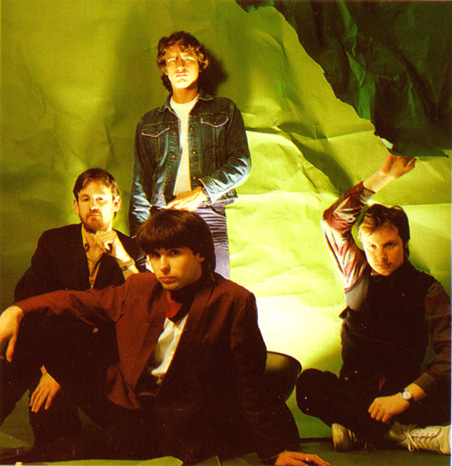 XTC this weekend, recorded live in concert from March 25, 1978 – when the band was just 15 months old. Argued over whether they were more popular in the U.S. than the UK, they had mass appeal and a string of hits to prove it worldwide.

Although they maintained a huge popularity well into the 80’s, it’s their earlier material that established them as more than just a passing fancy. And, as with any band, capturing them live during their formative years is always exciting to hear. It’s the newness of it all – both for the group and the audience.

In August 1977, XTC made their first commercially released studio recordings with producer John Leckie at Abbey Road, which appeared on their debut album 3D EP in October. Their first full-length record, White Music, was then recorded in less than two weeks, and released for January 1978. Partridge characterized the album as “Captain Beefheart meets the Archies” shrouded in 1950s-style retrofuturism. He reflected that the album was the sum of everything the band enjoyed, including the Beatles, Sun Ra, and Atomic Rooster, but dismissed the contents as premature songs “built around this electric wordplay stuff”. White Music reached number 38 on the UK Albums Chart. Although the album was well received by the press (Melody Maker, NME, Sounds, and Record Mirror all gave positive reviews), none of its singles managed to chart. They rerecorded “This Is Pop” as a lead single. Its follow-up, “Statue of Liberty”, was banned on BBC Radio due to the lyric “I sail beneath her skirt”. With each member placed on a £25 weekly salary, the band toured perpetually for the next five years. The group also made appearances on the children’s television shows Tiswas and Magpie, which meant they would occasionally play for under-16 crowds on these early tours. Partridge enjoyed these early shows, but would later resent touring as the band’s audience numbers grew and the performing experience became more impersonal.

The Go 2 cover art, designed by Hipgnosis, featured a wall of text beginning with “This is a record cover. This writing is the design …”. The marketing satire was received with critical acclaim.
By August 1978, XTC were prepared to record their next album. The band had contacted Brian Eno to produce after they learned that he was a fan, but he declined, telling them that they were good enough to produce themselves. Virgin rejected Eno’s advice, and the group instead returned to Abbey Road with Leckie. Andrews appeared at the sessions with several original songs, but Partridge did not feel they were right for the band. He began taking Moulding and Chambers out for drinks without inviting Partridge, allegedly in an attempt to take over the group. After most of Andrews’ songs were dropped from the final track list, the keyboardist told journalists that he foresaw the band “explod[ing] pretty soon”. Go 2, a more experimental venture, was released in October to positive reviews and a number 21 chart peak. Like White Music, it was given praise in Sounds, Melody Maker, and the NME. One of the tracks, “Battery Brides (Andy Paints Brian)”, was written in tribute to Eno. The album also included a bonus EP, Go+, which consisted of five dub remixes of XTC songs.

And the band is in fine form for this concert.

I think most everyone will agree you can crank this one up.