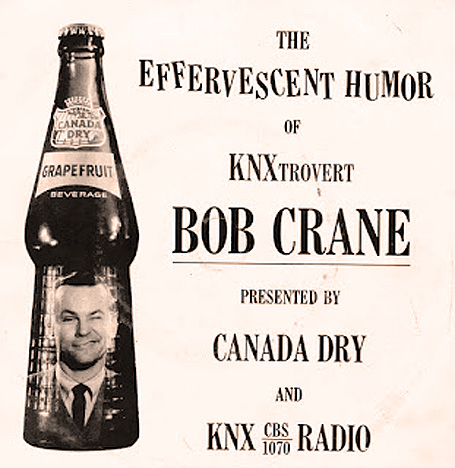 Bob Crane On The Radio – 1960 – Past Daily Pop Chronicles

In retrospect, it really wasn’t that long ago that radio was a veritable hotbed of Personalities – every station and every format seemed to have those people whom the audience stuck to like glue and who were fixtures in our daily lives and who weren’t particularly interested in making you paranoid, seething or schizophrenic and had little or no political axes to grind. Every city and town that could be reached by the somewhat archaic technology of broadcast radio, boasted their own personalities, and where you lived pretty much dictated who you were a fan of.

The major metropolitan areas like L.A., New York, Boston, Chicago and San Francisco had an embarrassment of riches in the Radio Personality department. It was cause for stiff competition. One of the most popular in Los Angeles was Bob Crane.

Probably best known now via the 60’s TV series Hogan’s Heroes, Crane was a radio personality many years before he entered TV. His daily morning show on KNX in Los Angeles was almost required listening if you lived in L.A. at the time. His rapid fire delivery, the staccato sketches and the veritable who’s who of guests made him one of the most listened to Personalities in radio throughout the 1950’s and 1960’s.

Here is a sample by way of an audition for a proposed evening version of his daily morning show from February 24, 1960.

Yes, radio was very different then.