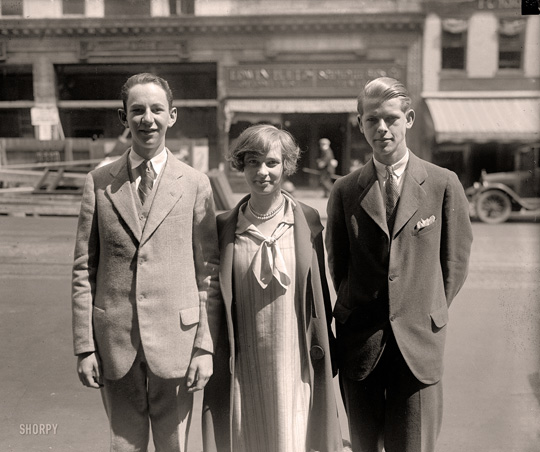 In lieu of a band photo - Cultural Anthropology: Teenagers in 1925

George Olsen And His Music – 1925 – Nights At The Roundtable

In lieu of a band photo – Cultural Anthropology: Teenagers in 1925

Click on the link here for Audio Player: George Olsen And His Music – Sugar Plumb – 1925

Since the Studio/Past Daily Nerve Center has been undergoing renovations this past week, I’ve been stumbling over buried shelves of old 78’s – some I haven’t played since they arrived. And since Nights At The Roundtable is an eclectic mish-mash of music most nights anyway, why not end the week/start the new one, with something I usually don’t play; 1920’s Big Band.

This one comes from one of the more popular Dance bands of the 1920’s, a band in heavy competition with Paul Whiteman and His Orchestra. They both recorded for the same label (Victor), and both bands had a massive catalog to their credit and both were huge throughout the 20’s and into the 1930’s.

So rather than try and make something profound out of this entry from a historic standpoint, I thought I would just grab at random, and I chose this one – Sugar Plumb, recorded in 1925 and certainly one of the more danceable numbers the kids in the above photo probably cut a few rugs to.

There has always been Pop Music and Pop Culture – it just sounds and looks different over the years. The sentiment is the exact same.