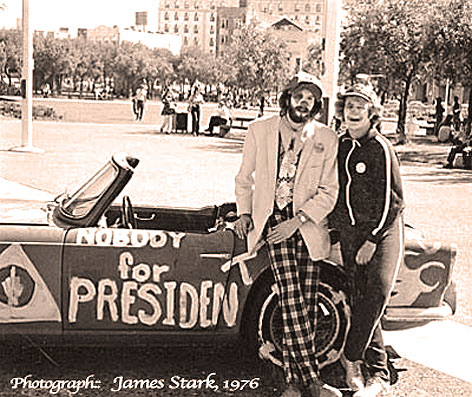 And in 1976 there were some who thought this was a plausible plan too.

And in 1976 there were some who thought this was a plausible plan too.

Click on the link here for Audio Player: News for week ending October 2, 1976

For the week ending on October 2nd in 1976, it was a busy flurry of news. Starting with the adjounrnment of the 94th Congress and assessments, blame and praise handed out to anyone willing to analyze. President Ford was in the midst of waging a Veto battle with Congress, having exersised the option some 59 times during this session. Despite that, Senator Robert Byrd was quick to add that progress had been made, with an extension of the Voting Rights Act for another 7 years, passing the first Anti-Trust legislation in over a generation and redesigning a $22.8 Billion tax-cut to refocus the benefit to low and middle-income Americans. Still, there were some who said it was a “do-nothing” Congress

The end of this session of the 94th Congress also saw the retirements of three key and influential members – Mike Mansfield, Hugh Scott and Carl Albert.

And this was the end of the first official week of campaigning for President Ford and Jimmy Carter. The polls were saying it was too close to call and some saying it was a toss-up.

President Ford became the object of scrutiny when calls for an investigation of his ethics when he was in Congress started to surface.

More vehement calls came for the resignation of Agriculture Secretary Earl Butz over his “loose shoes-tight pussy-warm place to shit” slur that triggered a firestorm of outrage.

And there were worries over the Economy, not only in the U.S. but also in the UK, where the recession was worsening.

Elsewhere in the world: The Soviet Union’s Andrei Gromyko slammed U.S. Foreign Policy towards Africa during an address at the UN General Assembly, prompting Secretary of State Henry Kissinger to respond in defense of our position towards the political situation in Rhodesia.

Saudi Arabia was busy backtracking this week, initially threatening a boycott of the U.S. and asking other oil-producing Arab nations to refuse to sell oil over the U.S. refusal to back an Arab boycott of Israel. The Saudi Foreign Minister quickly recanted, saying that’s not what he said and not what he meant. This hot on the heels of Congress second-guessing the pending sale of Fighter jets to the Saudis. Oops.

And just before Congress adjourned there was a series of hearings regarding the drug problem in the U.S. – this time it was Prescription Drug abuse. It was disclosed that over 59% of all Prescription anti-depressants and anti-psychotic medication recipients were women. The first time this had happened. And down the hall, the Senate was holding hearings on Alcoholism and listening to the testimony of Susan B. Anthony, grand-daughter of the famous Feminist and a woman who had been sober for over 30 years. She testified that the rate for alcoholic Women in the U.S. had jumped up by an alarming rate, with the number of teenage girls abusing alcohol three times that of teenage boys. Startling statistics.

All that, and a lot more for this week ending October 2, 1976, as reported on ABC’s World News This Week.