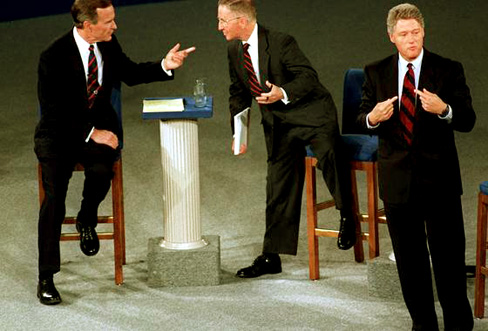 I never thought I would find myself going all dewy-eyed at the thought of the 1992 Presidential election. But listening to this debate, the second of three, had me absolutely nostalgic for the days when civility was still a virtue, even in debates.

Ross Perot with his famous “Sucking Sound” analogies regarding the economy – all three of them (President Bush Sr., Ross Perot and Gov. Bill Clinton) discussing Healthcare, Social Security, Poverty, jobs; all of them with a clearly defined take on what they thought the solution to the problem was.

Clearly, things have slid off the rails these past 20 years.

So as a reminder – and there will be several more in the days ahead, here is the second Presidential Debate, as it aired over NPR on October 15, 1992. The 90 minute debate has been broken up into two players with the first sixty minutes on the top player and the last 30 minutes on the bottom player.