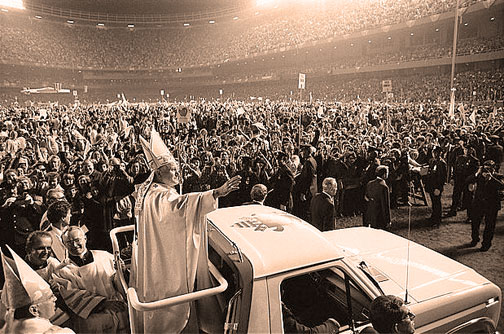 The Pope Mobile going through its paces.

The Pope Mobile going through its paces.

News for this October 5th in 1979 had to do with good jobs numbers in September and the unemployment rate slipping below 6%. Then, as now, it took most everyone by surprise, but the numbers were reassuring the recession was turning around. Extra added bonus was the news the United Auto Workers had reached a tentative contract with Ford.

Meanwhile, Pope John Paul II was continuing his coast-to-coast tour of the U.S. with his arrival in Chicago, to a huge crowd, with over a million expected later on in the evening.

On Capitol Hill – crossing t’s and dotting i’s over the SALT II treaty, making sure everything was verifiable.

That, and a lot more, was how this day rolled in 1979 via Dallas Townsend and The CBS World News Roundup.