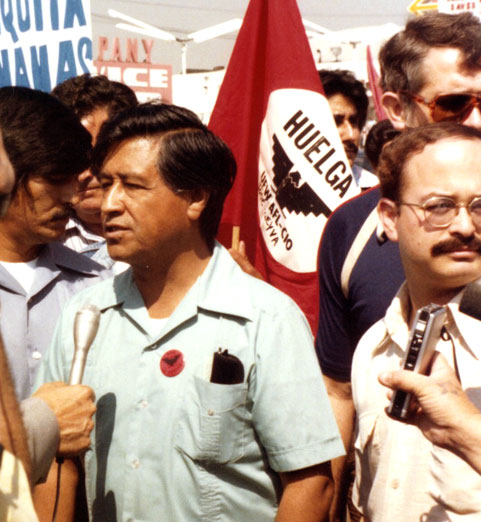 Cesar Chavez - The relentless struggle for dignity and a decent wage.

Cesar Chavez – The relentless struggle for dignity and a decent wage.

As a reminder today of just who Cesar Chavez was and what he stood for, here is an interview with Chavez from May 17, 1968, at the height of the Grape Boycott and the struggle for recognition the Migrant Farm Worker had throughout the 1950’s and 1960’s.

In 1962 Cesar founded the National Farm Workers Association, later to become the United Farm Workers – the UFW. He was joined by Dolores Huerta and the union was born. That same year Richard Chavez designed the UFW Eagle and Cesar chose the black and red colors. Cesar told the story of the birth of the eagle. He asked Richard to design the flag, but Richard could not make an eagle that he liked. Finally he sketched one on a piece of brown wrapping paper. He then squared off the wing edges so that the eagle would be easier for union members to draw on the handmade red flags that would give courage to the farm workers with their own powerful symbol. Cesar made reference to the flag by stating, “A symbol is an important thing. That is why we chose an Aztec eagle. It gives pride . . . When people see it they know it means dignity.”

For a long time in 1962, there were very few union dues paying members. By 1970 the UFW got grape growers to accept union contracts and had effectively organized most of that industry, at one point in time claiming 50,000 dues paying members. The reason was Cesar Chavez’s tireless leadership and nonviolent tactics that included the Delano grape strike, his fasts that focused national attention on farm workers problems, and the 340-mile march from Delano to Sacramento in 1966. The farm workers and supporters carried banners with the black eagle with HUELGA (strike) and VIVA LA CAUSA (Long live our cause). The marchers wanted the state government to pass laws which would permit farm workers to organize into a union and allow collective bargaining agreements. Cesar made people aware of the struggles of farm workers for better pay and safer working conditions. He succeeded through nonviolent tactics (boycotts, pickets, and strikes). Cesar Chavez and the union sought recognition of the importance and dignity of all farm workers.

It was the beginning of La Causa a cause that was supported by organized labor, religious groups, minorities, and students. Cesar Chavez had the foresight to train his union workers and then to send many of them into the cities where they were to use the boycott and picket as their weapon.

Cesar was willing to sacrifice his own life so that the union would continue and that violence was not used. Cesar fasted many times. In 1968 Cesar went on a water only, 25 day fast. He repeated the fast in 1972 for 24 days, and again in 1988, this time for 36 days. What motivated him to do this? He said, Farm workers everywhere are angry and worried that we cannot win without violence. We have proved it before through persistence, hard work, faith and willingness to sacrifice. We can win and keep our own self-respect and build a great union that will secure the spirit of all people if we do it through a rededication and recommitment to the struggle for justice through nonviolence.