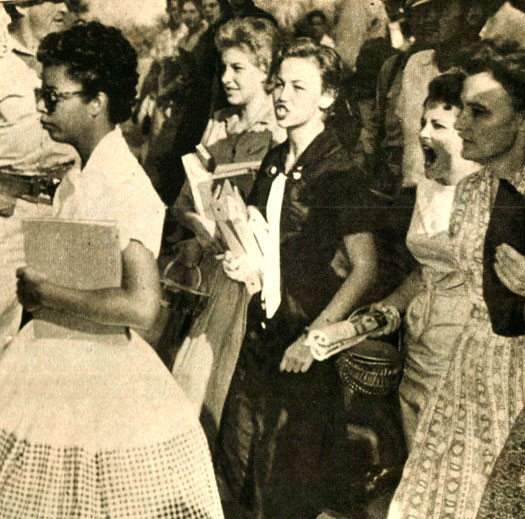 The scene at Central High in Little Rock in 1957 - Tolerance and doing-the-right-thing being suspiciously absent that year.

The scene at Central High in Little Rock in 1957 – Tolerance and doing-the-right-thing being suspiciously absent that year.

Fifty-Five years ago, starting in September, the controversy and the battle began over Integration in public schools. Nowhere was it more contentious than in the South, where Federal troops were sent in to insure School Integration legislation was carried out.

And Little Rock, Arkansas became a flash-point. The drama unfolding at Central High brought the focus of attention from the entire world who largely viewed the protests and clashes with curious revulsion. Yes, we were supposed to be the greatest nation on Earth, yet somehow Civil Rights caught us by surprise.

And it became the focus of International Press, which included this informal discussion by a group of students from Central High and a member of the Norwegian Press.

Seems the kids had a thing or two to say about the matter.

Here is that entire interview as broadcast by NBC Radio on October 17, 1957.