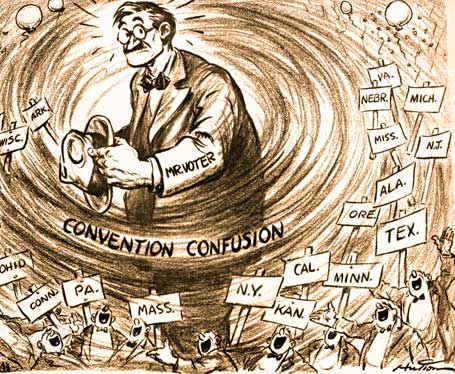 Click on the link here for Audio layer: Picking A President – Oct. 1968

Pres. Eisenhower: “The National Convention today is brought to every home in the United States by television, and now even more significant, by Early Bird and Telstar, those pictures are going to nations all over the civilized world.

Now, what do we see? We see a picture of confusion, of noise, of impossible deportment; of indifference toward the subjects that are being discussed from the platform, and in short, a thing that if it happened into a business trustee meeting, you’d be horrified.

Well I think that most of the United States is horrified by what it sees of these conventions.”

Interesting when you think former President Eisenhower was talking about the 1964 Presidential Conventions. By 1968 it was already out of control. The whole Election process seemed to be a runaway train.

I can’t imagine what they would have to say about our system now.