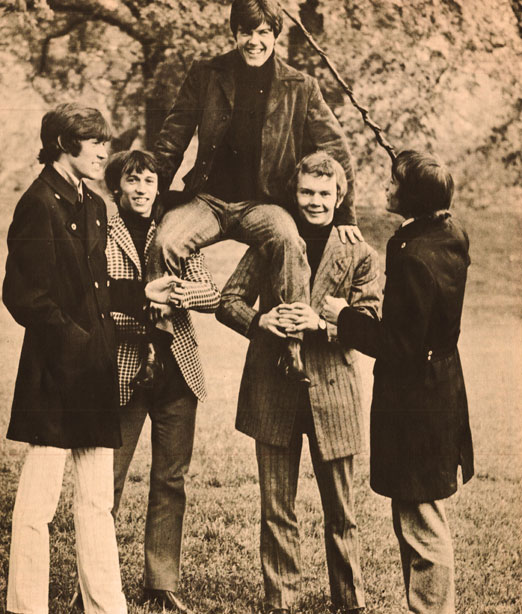 The Bee Gees - In 1967 their Disco metamorphosis was seemingly a lifetime off.

The Bee Gees In Session – 1967 – Past Daily Soundbooth

The Bee Gees – In 1967 their Disco metamorphosis was seemingly a lifetime off.

We can always use the support. now more than ever: Become a Patron!

Some early Bee Gees tonight. Long before their transformation into one of the Disco icons of the 1970’s, The Bee Gees were an extremely popular and well-regarded band in the mid/late 1960’s. Straddling the worlds of Pop and Psychedelia, The Brothers Gibb crafted a massive catalog of memorable songs which, not only they recorded, but were recorded by numerous bands both in the UK and their native Australia.

Some critical acclaim for the band during this pivotal time via Bruce Eder at Allmusic:

In one fell swoop, they became competitors with the likes of veteran rock bands such as the Hollies and the Tremeloes, and this long-player, Bee Gees’ 1st, is more of a rock album than the group usually got credit for generating. Parts of it do sound very much like the Beatles circa Revolver, but there was far more to their sound than that. The three hits off of Bee Gees’ 1st, “To Love Somebody” “New York Mining Disaster 1941” and “Holiday” were gorgeous but relatively somber, thus giving Bee Gees’ 1st a melancholy cast, but much of the rest is relatively upbeat psychedelic pop.” In My Own Time” may echo elements of the Beatles’ “Doctor Robert” and “Taxman” but it’s difficult to dislike a song with such delicious rhythm guitars and a great beat, coupled with the trio’s soaring harmonies; “Every Christian Lion Hearted Man Will Show You” was close in spirit to the Moody Blues of this era, opening with a Gregorian chant backed by a Mellotron, before breaking into a strangely spaced-out, psychedelic main song body. Robin Gibb’s lead vocals veered toward the melodramatic and poignant, and the orchestra did dress up some of the songs a little sweetly, yet overall the group presented themselves as a proficient rock ensemble who’d filled their debut album with a full set of solid, refreshingly original songs.

If you’ve never heard The Bee Gees pre-Disco, you’re in for a surprise. If you remember The Bee Gees during this period, you’ll know why there was a lot of head-scratching when Stayin’ Alive hit the airwaves.