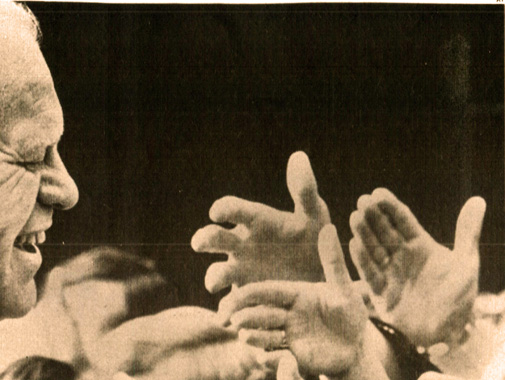 Since October 31st came on a Sunday in 1976, this was the last weekend before the Presidential election. According to the Harris Poll, Carter’s poll standings were falling and it was becoming a dead heat between Carter and President Ford. The last minute campaigning was at a fever-pitch.

In other news – Koreagate was about to spring to life, with reports of bribery rife on Capitol Hill and fingers pointed at Reverend Moon, with the South Korean government tangled in there as well.

Also on Capitol Hill – the Court of Appeals ruled the Nixon tapes were okay to be played and sold to the public, much to the dismay of Nixon. On a Watergate-related matter – Watergate figure John Ehrlichmann was heading off to jail.

The last of the Scottsboro boys was pardoned by Alabama Governor Wallace.

A Coroner’s inquest revealed the skipper of a Ferryboat involved in a deadly collision on the Mississippi River had a blood/alcohol level above the legal limit. The accident claimed 100 lives.

New York Congressman Murphy released a preliminary report on the Legionnaires Disease outbreak in Philadelphia the past July as being possibly the result of poisoning. The Congressman did admit the potential culprit had to be pretty deranged and pretty good with chemistry. Doubts were raised.

The FDA warned against the use of Aspirin during pregnancy.

And a survivor of a sailboat accident was rescued after being adrift for a month at sea without food. Who said miracles don’t happen?

And that’s just a taste of went on this week, ending October 31, 1976 as reported on ABC Radio’s Voices In The Headlines.